India, Pakistan, and Democracy
Solving the Puzzle of Divergent Paths 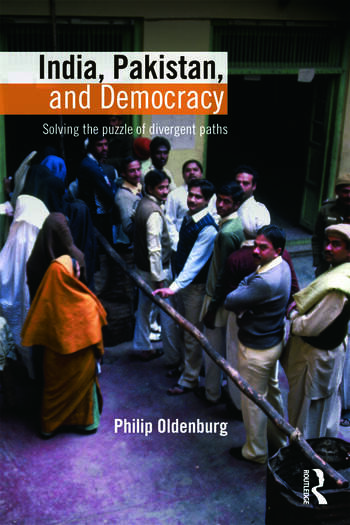 India, Pakistan, and Democracy: Solving the Puzzle of Divergent Paths

The question of why some countries have democratic regimes and others do not is a significant issue in comparative politics. This book looks at India and Pakistan, two countries with clearly contrasting political regime histories, and presents an argument on why India is a democracy and Pakistan is not. Focusing on the specificities and the nuances of each state system, the author examines in detail the balance of authority and power between popular or elected politicians and the state apparatus through substantial historical analysis.

India and Pakistan are both large, multi-religious and multi-lingual countries sharing a geographic and historical space that in 1947, when they became independent from British rule, gave them a virtually indistinguishable level of both extreme poverty and inequality. All of those factors militate against democracy, according to most theories, and in Pakistan democracy did indeed fail very quickly after Independence. It has only been restored as a façade for military-bureaucratic rule for brief periods since then. In comparison, after almost thirty years of democracy, India had a brush with authoritarian rule, in the 1975-76 Emergency, and some analysts were perversely reassured that the India exception had been erased. But instead, after a momentous election in 1977, democracy has become stronger over the last thirty years.

1. Introduction: Why India is a Democracy and Pakistan is not (yet?) a Democracy  Part 1: The First Thirty Years of Independence  2. Inheritances of Colonial rule  3. Constitutional & Political Choices, in the initial years  4. Institutionalizing Democracy  5. Who (Really) Governs?  Part 2: From 1977 to the present 6. 1977 as a Turning Point?  7. Religion as an Explanation  8. External Influences  9. Clearly Diverging Paths  10. Prospects for Path Convergence in the Next Decades  11. Conclusion

Philip Oldenburg is a Research Scholar at the South Asia Institute of Columbia University, where he has taught political science since 1977. He has done field research in India on local self-government, and on national elections and has been editor or co-editor of ten books in the India Briefing series.

'This book deals with a most interesting and rather unexplored problem: why has India become a robust democracy and Pakistan ended up by being a military-ruled country while both of them share similar cultural features and emerged from the same history (including the colonial experience)?

Philip Oldenburg has not only chosen an excellent topic, he is also very well informed and gets his facts right. To present such an ambitious comparison in this format is a tour de force.' -- Christophe Jaffrelot, Senior Research Fellow CNRS, France

'This fine book, full of insight and wisdom, reflects Philip Oldenburg’s long scholarly engagement with the study of South Asian politics, and offers a magisterial synthesis of a wide literature in developing what will surely stand as the definitive comparative analysis of the political systems of India and Pakistan.' -- John Harriss, School for International Studies, Simon Fraser University, Canada

'This is the first major attempt to solve the puzzle of democratic divergence by looking at two countries with near-identical cultural, political, and social origins. Dr. Oldenburg's book is uniquely informed by deep familiarity with both India and Pakistan, and by a solid grasp of the relevant scholarly literature. It is a landmark in both regional studies and comparative political analysis, and will inform all future work on the  democratization process.' -- Stephen P. Cohen, Brookings Institution, USA

"It's impossible for this review to do full justice to this richly-detailed, cool-headed, well-grounded must read for anyone interested in South Asia--or in the study of democracy." -- Patricia Lee Sharpe, Whirled View

"The book is carefully researched, well documented, and clearly argued...Policy analysts, journalists, and students interested in the contemporary politics of India and Pakistan will benefit considerably from a careful perusal of this book." -- Sumit Ganguly, H-Asia

"This book offers a nuanced assessment which shows that while India and Pakistan have not converged on an authoritarian model, they have much in common... Thoughtful questions are asked, difficult issues considered and a large amount of material is synthesised. Scholars, students and teachers alike will find this book very useful." - Andrew Wyatt, University of Bristol, UK; Pacific Affairs: Volume 85, No. 2 - June 2012