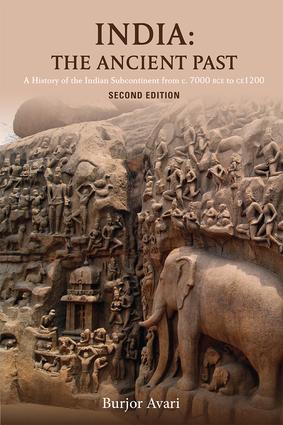 India: The Ancient Past

India: The Ancient Past provides a clear and systematic introduction to the cultural, political, economic, social and geographical history of ancient India from the time of the pre-Harappan culture nine thousand years ago up until the beginning of the second millennium of the Common Era. The book engages with methodological and controversial issues by examining key themes such as the Indus-Sarasvati civilization, the Aryan controversy, the development of Vedic and heterodox religions, and the political economy and social life of ancient Indian kingdoms.

This richly illustrated guide provides a fascinating account of the early development of Indian culture and civilization that will appeal to all students of Indian history.

Praise of the first edition:

'An engaging narrative of a complex civilization.' – Minerva

'Burjor Avari's balanced and well-researched book is a most reliable guide to the period of Indian history that it covers. It displays considerable mastery of primary and secondary literature and distils it into a wonderfully lucid exposition. This book should be of interest to both lay readers and academic experts'. - Lord Bhikhu Parekh, University of Westminster

Praise of this edition:

'This book is the ideal guide to India’s ancient past. In this updated and expanded edition, it is a more useful resource than ever, offering students and teachers alike a comprehensive and balanced overview of the key trajectories and debates in the history of pre-modern India. It deftly handles controversial issues and through its carefully curated selection of source materials invites the reader’s direct engagement with this riveting history.'

'With great equanimity and poise, India: The Ancient Past does an excellent job of presenting one of the world’s splendid pasts. Equipped with rich details, lucid prose, and accessible materials, it is up-to-date with current scholarship and presents a concise yet detailed chapter-by-chapter denouement of the broad sweeps of ancient India’s history . Brevity of topics, primary source extracts, and insightful analyses are a few among the many features that make this textbook a joy to teach with.'

'India: The Ancient Past improves hugely upon other college texts on the eras from the Stone Age to 1200 CE, in that it is accessible, comprehensive, politically neutral, often entertaining, and remarkably explanatory. This new edition is even better than the first on all counts, and is the best I have seen in over 40 years of teaching.'

1. Introduction 2. From Africa to Mehrgarh 3. The Harappan Civilization 4. The Indo-Aryans in the Vedic Age 5. Formative Centuries of the Pre-Mauryan Era 6. The Paradox of Mauryan Imperialism 7. Diffusion and Dynamism after the Mauryas 8. Stability and Change Under the Imperial Guptas 9. The Post-Gupta Era and the Rise of the South 10. Regionalism and Feudalism: Rajput, Pala and 296 Rashtrakuta Kingdoms 11. Chola Domination in the South and Turco-Afhan Plunder in the North

Burjor Avari MBE is Honorary Research Fellow in the Department of History at the Manchester Metropolitan University. He has taught history at school and university levels for over five decades. His previous publications include Islamic Civilization in South Asia: A History of Muslim Power and Presence in the Indian Subcontinent (Routledge, 2013).