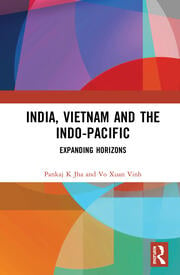 This book delves into the examination of bilateral relations between India and Vietnam in the 21st century and how the Indo-Pacific as a geo-political construct lends itself to the improvement of their engagement.

With the rise and increasing assertiveness of China, the slow growth of the United States, the resurgence of Japan, and the oscillating role of ASEAN as a multilateral organization, the Indo-Pacific has emerged as a theatre of international geostrategic competition. This book studies these changing geopolitical realities and new evolving strategic configurations, while addressing political, economic, defence, and strategic aspects of the relationship along with the role of China and the US in facilitating ties. India’s Act East Policy that was upgraded from the Look East Policy – one of the main drivers for India’s increasing presence in the Asia-Pacific region – is also examined in this volume.

1. India, Vietnam and the Indo-Pacific security architecture  2. The Indo-Pacific construct and the utility of ‘new’ derived regions  3. India’s Act East Policy and Vietnam  4. Political convergence in the context of the Indo-Pacific  5. Enhancing strategic understanding and developing defence cooperation  6. Ensuring peace, stability and security in the South China Sea  7. Developing trade and economic ties  8. India, Vietnam and ASEAN regionalism  9. The China factor in India–Vietnam relations  10. The US factor in Vietnam–India Relations  11. Conclusion

Pankaj K Jha is Associate Professor, Jindal School of International Affairs (JSIA), O P Jindal Global University, Haryana, India. He was previously Director (Research) of Indian Council of World Affairs. He has also worked as Deputy Director of National Security Council Secretariat, India, (2012–2013) and been closely associated with national security apparatus in India. He was a visiting fellow with Centre for International Security Studies, Sydney University, Australia, and Institute for South Asian Studies, Singapore. He has authored over 60 articles that have been published in books as well as refereed and non-refereed journals. He is regularly quoted in International Newspapers/Magazines such as Nikkei Asian Review, South China Morning Post, Bangkok Post, Gulf News and International Business Times, etc. He has authored two books: India and China in Southeast Asia: Competition or Cooperation (2013) and India and the Oceania: Exploring Vistas of Cooperation (2016).