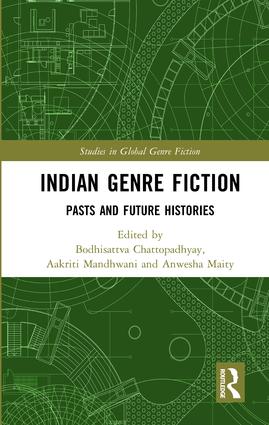 This volume maps the breadth and domain of genre literature in India across seven languages (Tamil, Urdu, Bangla, Hindi, Odia, Marathi and English) and nine genres for the first time. Over the last few decades, detective/crime fiction and especially science fiction/fantasy have slowly made their way into university curricula and consideration by literary critics in India and the West. However, there has been no substantial study of genre fiction in the Indian languages, least of all from a comparative perspective. This volume, with contributions from leading national and international scholars, addresses this lacuna in critical scholarship and provides an overview of diverse genre fictions.

Using methods from literary analysis, book history and Indian aesthetic theories, the volume throws light on the variety of contexts in which genre literature is read, activated and used, from political debates surrounding national and regional identities to caste and class conflicts. It shows that Indian genre fiction (including pulp fiction, comics and graphic novels) transmutes across languages, time periods, in translation and through publication processes. While the book focuses on contemporary postcolonial genre literature production, it also draws connections to individual, centuries-long literary traditions of genre literature in the Indian subcontinent. Further, it traces contested hierarchies within these languages as well as current trends in genre fiction criticism.

‘Genre fiction, particularly but not only in English, has been growing in popularity in India. This anthology is significant and necessary . . . It maps overlaps and contrasts between genre fiction in seven major Indian languages, and well combines literary exegesis with theoretical and historical readings . . . Drawing upon both Indian and non-Indian theoretical texts, the book does not just test Western definitions of genre fiction against the hard reality to genre texts from India, it also opens up space for a re-definition of such Western perceptions . . . A pioneering study that is interesting and well-timed.’

is a researcher at the Department of South Asia, Faculty of Languages and Cultures, SOAS, University of London, UK. She works on North Indian middle-class reading practices through the archive of the post-1947 commercial magazine and paperback in Hindi. Her areas of interest include book history, popular literature, intellectual history and urban studies. Her works include articles in Modern Asian Studies and a volume on Hinglish edited by Francesca Orsini and Ravikant Sharma (both forthcoming in 2018).

Anwesha Maity is a researcher at the Department of Comparative Literature and Folklore Studies (CLFS), University of Wisconsin-Madison, USA, from where she also obtained her doctoral degree. Her research interests include science fiction and genre fiction, postcolonial criticism, translation studies, and Sanskrit aesthetics. She has published in Science Fiction Studies, Studies in the Fantastic and Jadavpur University Essays and Studies.

Studies in Global Genre Fiction offers original insights into the history of genre literature while contesting two hierarchies that constrain global genre fiction studies: (1) Anglophone literature and other global language literatures and (2) literary fiction and genre fiction. The series explores the exchanges between different literary cultures that form aesthetic concerns and the specific literary, sociopolitical, geographical, economic, and historical forces that shape genre fiction globally. A key focus is understudied genre fictions from the ‘global South’ — where geographical location or language often confines works to the margins of the global publishing industry, international circulation, and academic scrutiny, even if they may be widely read in their own specific contexts.

Contributions to this series investigate the points of disruption, intersection and flows between literary and genre fiction. The series analyses cross-cultural influences in literary classifications, translation, transcreation, localization, production, and distribution while capturing the rich history of world and global literatures.