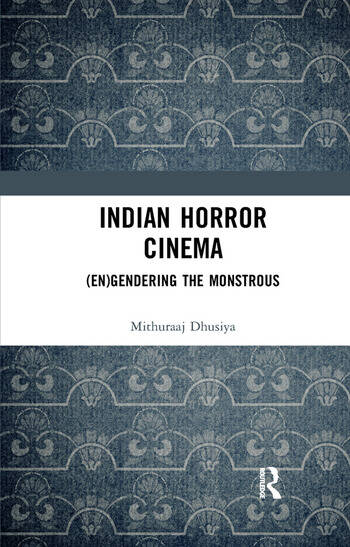 This book studies the hitherto overlooked genre of horror cinema in India. It uncovers some unique and diverse themes that these films deal with, including the fear of the unknown, the supernatural, occult practices, communication with spirits of the deceased, ghosts, reincarnation, figures of vampires, zombies, witches and transmutations of human beings into non-human forms such as werewolves. It focusses on the construction of feminine and masculine subjectivities in select horror films across seven major languages – Hindi, Tamil, Telugu, Kannada, Bangla, Marathi and Malayalam.

The author shows that the alienation of the body and bodily functions through the medium of the horror film serves to deconstruct stereotypes of caste, class, gender and anthropocentrism. Some riveting insights emerge thus, such as the masculinist undertow of the possession narrative and how complex structures of resistance accompany the anxieties of culture via the dread of laughter.

Acknowledgements. Introduction: Horror in Indian Cinema: An Afterthought? 1. The Masculinist Economy of Possession Narratives 2. Vampirism as Structures of Resistance 3. The Ghastly Gendered Narrative of Animal Transformation 4. Zombies and Witches and the Anxieties of Culture 5. Do We Fear Laughter? The Genre of Horror-Comedy 6. There are No Ghosts, Only Ghostly Tales: Indian Horror and the ‘Uncanny’. Epilogue: Fear, Are We There Yet?. Appendix: Annotated Filmography of Horror Films in India. Glossary. Bibliography. Filmography. Index