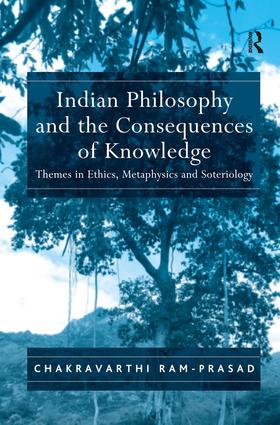 Indian Philosophy and the Consequences of Knowledge

This book presents a collection of essays, setting out both the special concern of classical Indian thought and some of its potential contributions to global philosophy. It presents a number of key arguments made by different schools about this special concern: the way in which attainment of knowledge of reality transforms human nature in a fundamentally liberating way. It also looks in detail at two areas in contemporary global philosophy - the ethics of difference, and the metaphysics of consciousness - where this classical Indian commitment to the spiritually transformative power of knowledge can lead to critical insights, even for those who do not share its presuppositions. Close reading of technical Indian texts is combined with wide-ranging and often comparative analysis of philosophical issues to derive original arguments from the Indian material through an analytic method that is seldom mastered by philosophers of non-western traditions.

’Although it is not possible in a short review to do justice to the rich detail of these wide-ranging and thought-provoking essays, I hope I have said enough by now about this very interesting collection to whet the appetite of any potential reader. Certainly, I can assure every scholar of classical Indian philosophy of finding much here to be read with profit and pleasure.’ Nagoya Studies in Indian Culture and Buddhism

Contents: Preface; Introduction; Multiplist metaphysics and ethics; Consciousness and luminosity: on how knowledge is possible; Knowledge and action: how to attain the highest good; Liberation without annihilation: Parthasarathi Misra on jÃ±anasakti; Conceptuality in question: teaching and pure cognition in Yogacara-Madhyamaka; Bibliography; Index.

Chakravarthi Ram-Prasad studied History, Politics and Sociology in India before taking a doctorate in Philosophy at Oxford. He taught Philosophy at the National University of Singapore, and held Research Fellowships at Trinity College, Oxford, and Clare Hall, Cambridge, before joining Lancaster University where he is now Professor of Comparative Religion and Philosophy. His books are Knowledge and Liberation in Classical Indian Thought (2001), Advaita Epistemology and Metaphysics (2002), and Eastern Philosophy (2005). He has written over forty papers in Indian and comparative philosophy, politics and religion, and classical Indian religions.