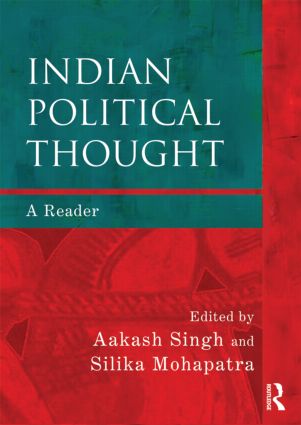 This Reader provides a comprehensive introduction to the study of contemporary Indian political theory. Tracing the development of the discipline and offering a clear presentation of the most influential literature in the field, it brings together contributions by outstanding and well-known academics on contemporary Indian political thought. The Reader weaves together relevant works from the social sciences — sociology, anthropology, law, history, philosophy, feminist and postcolonial theory — which shape the nature of political thought in India today. Themes both unique to the Indian political milieu as well as of universal significance are reflected upon, including tradition, secularism, communalism, modernity, feminism, justice and human rights. Presenting a canon of names and offering a framework for further research within the broad thematic categories, this is a timely and invaluable reference tool, indispensable to both students and scholars.

'In our time of globalization, people in the West are increasingly looking beyond the limits of the West for insights and teachings. It is very important and fascinating to find out what is happening today in India in terms of political philosophy. This Reader is timely and very much needed as there is simply no comparable text available. The group of texts presented bring together simply the most outstanding and most well known Indian political thinkers today. It is in fact a "who's who" in contemporary Indian political thought.'

'A significant attempt to construct a foundational text for contemporary Indian political thought, this volume meets a deeply felt need. Singh and Mohapatra have put together a first rate Reader that will challenge, educate and provoke. It will serve as an indispensable source of reference to students and teachers alike.'

Silika Mohapatra is Research Scholar in the Department of Philosophy at the University of Delhi, India. Her research interests include classical metaphysics, phenomenology, semiotics and the ethics of self and society.