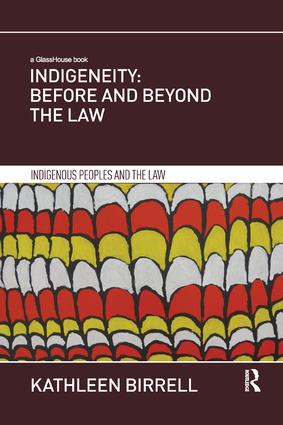 Indigeneity: Before and Beyond the Law

Examining contested notions of indigeneity, and the positioning of the Indigenous subject before and beyond the law, this book focuses upon the animation of indigeneities within textual imaginaries, both literary and juridical. Engaging the philosophy of Jacques Derrida and Walter Benjamin, as well as other continental philosophy and critical legal theory, the book uniquely addresses the troubled juxtaposition of law and justice in the context of Indigenous legal claims and literary expressions, discourses of rights and recognition, postcolonialism and resistance in settler nation states, and the mutually constitutive relation between law and literature. Ultimately, the book suggests no less than a literary revolution, and the reassertion of Indigenous Law.

To date, the oppressive specificity with which Indigenous peoples have been defined in international and domestic law has not been subject to the scrutiny undertaken in this book. As an interdisciplinary engagement with a variety of scholarly approaches, this book will appeal to a broad variety of legal and humanist scholars concerned with the intersections between Indigenous peoples and law, including those engaged in critical legal studies and legal philosophy, sociolegal studies, human rights and native title law.

The Question of Indigeneity

To Speak of the Other

Return of the Native

The Madness of the Decision

An Idea of Justice

A Law of Alterity

Kathleen Birrell is based at Melbourne Law School, Australia.

Indigenous Peoples and the Law

The colonial modalities which resulted in the pillaging of the ‘New World’ involved wholesale dispossession, genocidal violence and exploitation of their original inhabitants. It was not, however, until the latter part of the twentieth century that Indigenous peoples attained some degree of legal recognition. This book series focuses upon the manner in which Indigenous peoples’ experiences of law have been transformed from an oppressive system of denying rights to a site of contestation and the articulation of various forms of self-governance. Encouraging a range of theoretical, political and ethical perspectives on Indigenous peoples and the law, this book series aims to provide a comprehensive survey of the experience of Indigenous peoples and their changing relationship with national and international juridical frameworks.

The series will include both monographs and edited collections pursuing variety a of perspectives – including, but not limited to, a concern with:

The University of British Columbia