Indigenous Histories of the American South during the Long Nineteenth Century 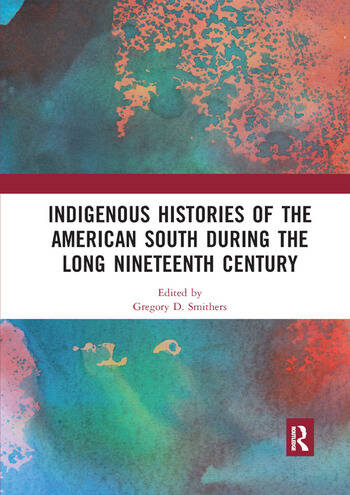 Indigenous Histories of the American South during the Long Nineteenth Century

Native Southerners lived in vibrant societies, rich in tradition and cultural sophistication, for thousands of years before the arrival of European colonization in the sixteenth and seventeenth centuries. Over the ensuing centuries, Native Southerners adapted to the presence of Europeans, endeavouring to incorporate them into their social, cultural, and economic structures. However, by the end of the American Revolutionary War, Indigenous communities in the American South found themselves fighting for their survival. This collection chronicles those fights, revealing how Native Southerners grappled with colonial legal and political pressure; discussing how Indigenous leaders navigated the politics of forced removal; and showing the enduring strength of Native Americans who evaded removal and remained in the South to rebuild communities during the latter half of the nineteenth century. This book was originally published as a special issue of American Nineteenth Century History.

Introduction: Indigenous histories of the American South during the long nineteenth century  1. "The Indians of every denomination were free, and independent of us": Anglo-Virginian explorations of indigenous slavery, freedom, and society, 1772–1830  2. Indian land sales and allotment in Antebellum Virginia: trustees, tribal agency, and the Nottoway reservation  3. Violence and the competition for sovereignty in Cherokee Country, 1829–1835  4. Tribal "remnants" or state citizens: Mississippi Choctaws in the post-removal South  5. Serving the Choctaw cause: Robert M. Jones, sovereignty, and pragmatic diplomacy during the American Civil War  6. A southern portrait by another kind of artist  7. Reflections on the long nineteenth century and Indian Removal

Gregory Smithers is Professor of History at Virginia Commonwealth University, USA. He specializes in the history of Native Americans in the American South. His most recent book is The Cherokee Diaspora: An Indigenous History of Migration, Resettlement, and Identity (2015).