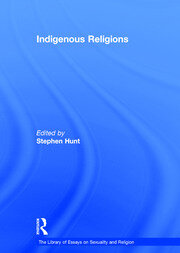 This volume on Indigenous Religions in The Library of Essays on Sexuality and Religion series focuses on indigenous religions and their attitudes towards human sexuality. Through previously-published articles the volume gives full scope to attitudes towards sexuality found in a vast range of contrasting expressions of religiosity outside of the so-called 'World Faiths'. Examples are taken from cultures as far afield as Africa, Australasia, South America and the Pacific islands. Part 1 includes a number of articles centring on the role of sexuality in rites of passage and initiation in relation to liminality, maturity and reproduction. Part 2 examines the relationship between sexuality, spirit possession and witchcraft. Part 3 includes such areas as religion, gender, patriarchy and both hetero-sexualality and non-heterosexuality. The final part considers sexuality and indigenous religions in a changing and globalised world and entails the themes of sexuality as expressed through 'cargo cults', pilgrimage and religiosity in the context of colonial dominance.

'...an insightful inclusion to the collection, moving away from dominant world religions to an exploration of religious practices and spiritualities that encompass ancient traditions.' Religion and Human Rights Journal ’...a fascinating insight into both the origins of early religious traditions and sexuality, and into the modern world of religion and sex. Hunt has accomplished a feat at collecting a rich and varied selection of essays and articles that create a thorough, well-developed three-dimensional context within which sex, religion and society intersect. These works are valuable tools to consider these intersections, the lives of both modern and historical humankind.’ Sexuality & Culture