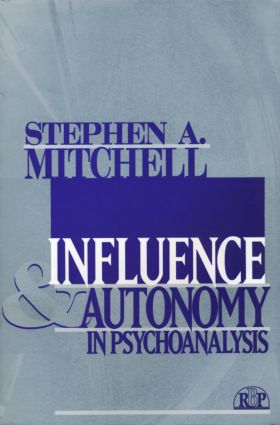 Influence and Autonomy in Psychoanalysis

By Stephen A. Mitchell

Stephen A. Mitchell has been at the forefront of the broad paradigmatic shift in contemporary psychoanalysis from the traditional one-person model to a two-person, interactive, relational perspective. In Influence and Autonomy in Psychoanalysis, Mitchell provides a critical, comparative framework for exploring the broad array of concepts newly developed for understanding interactive processes between analysand and analyst. Drawing on the broad traditions of Kleinian theory and interpersonal psychoanalysis, as well as object relations and progressive Freudian thought, he considers in depth the therapeutic action of psychoanalysis, anachronistic ideals like anonymity and neutrality, the nature of analytic knowledge and authority, and the problems of gender and sexual orientation in the age of postmodernism. The problem of influence guides his discussion of these and other topics. How, Mitchell asks, can analytic clinicians best protect the patient’s autonomy and integrity in the context of our growing appreciation of the enormous personal impact of the analyst on the process?

Although Mitchell explores many facets of the complexity of the psychoanalytic process, he presents his ideas in his customarily lucid, jargon-free style, making this book appealing not only to clinicians with various backgrounds and degrees of experience, but also to lay readers interested in the achievements of, and challenges before, contemporary psychoanalysis. A splendid effort to relate parallel lines of theorizing and derivative changes in clinical practice and informed by mature clinical judgment and broad scholarship into the history of psychoanalytic ideas, Influence and Autonomy in Psychoanalysis takes a well-deserved place alongside Mitchell’s previous books. It is a brilliant synthesis of converging insights that have transformed psychoanalysis in our time, and a touchstone for enlightened dialogue as psychoanalysis approaches the millennium.

"Among the issues that matter now to psychoanalysts, none outweighs the one Stephen Mitchell takes up here: how, paradoxically, whatever shred of autonomy each of us has in creating ourselves as human beings might be enhanced by a treatment in which we expect to be influenced by the authority and knowledge of another person. He demonstrates a breathtaking capacity to open up the theoretical labyrinth that has been constructed in the psychoanalytic literature to address this and related questions and to illuminate the clinical situations in which they prove especially troubling. As has been the case for almost two decades, Mitchell keeps his writing hand on the pulse of contemporary psychoanalysis. Influence and Autonomy in Psychoanalysis, like Mitchell's previous books, will be widely read and discussed by admirers and critics alike, and this because Mitchell continues to capture with astonishing precision and prescience, as well as great writing, not only where the cutting edge of analytic work and debate is at the moment, bu where they are heading."

"It seems to me that Mitchell's outstanding psychoanalytic contributions have been building toward this invaluable book in which, with characteristic erudition, wisdom, and humor, he refines and extends the careful comparative psychoanalytic study he has been carrying out in recent years. Focusing on the central problem of influence in analytic treatment, Mitchell offers a cogent critique, anchored in evocative clinical vignettes, of various schools of analytic thought, and builds on it to present his own conception of clinical psychoanalysis as a method for generating a particular kind of meaning and fostering a way of life. In clear and readable prose, Mitchell makes a case for retaining autonomy and authenticity as primary analytic objectives to be achieved through interpersonal influence rather than despite it. Influence and Autonomy in Psychoanalysis is a marvelously rich, quietly courageous work that shows us where we've come in psychoanalysis and where we need to be heading."

“Stephen Mitchell, one of the most original and insightful analytic theorists and clinicians writing today, distinguishes himself in Influence and Autonomy in Psychoanalysis as one of today’s finest teachers of the theory and practice of psychoanalysis. He is without peer in the breadth and depth of his understanding of the movement, interplay, and direction of ideas constituting contemporary psychoanalytic thought. In Mitchell’s hands, creativity and spontaneity on the part of the analyst live comfortably with careful and rigorous listening, observing, and thinking. This book is a wonderful contribution with which to mark the beginning of the second century of the practice of psychoanalysis.”

- Thomas Ogden, M.D., Center for the Advanced Studies of the Psychoses