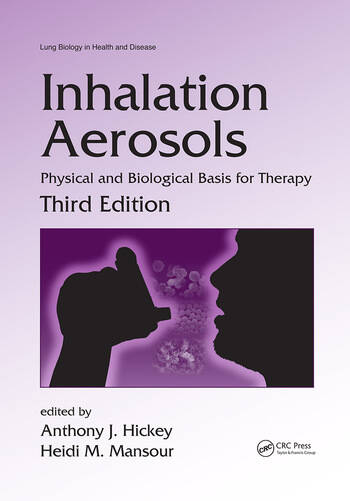 Inhalation aerosols continue to be the basis for successful lung therapy for several diseases, with therapeutic strategies and the range of technology significantly evolving in recent years.

In response, this third edition takes a new approach to reflect the close integration of technology with its application. After briefly presenting the general considerations that apply to aerosol inhalation, the central section of the book uses the focus on disease and therapeutic agents to illustrate the application of specific technologies.

The final integrated strategies section draws the major points from the applications for disease targets and drug products.

Anthony J. Hickey, PhD, DSc, is Distinguished RTI Fellow, at the Research Triangle Institute (2010-present), Emeritus Professor of Molecular Pharmaceutics of the Eshelman School of Pharmacy (1993-2010), and Adjunct Professor Biomedical Engineering in the School of Medicine at the University of North Carolina at Chapel Hill. He obtained PhD (1984) and DSc (2003) degrees in pharmaceutical sciences from Aston University, Birmingham, United Kingdom, following postdoctoral positions at the University of Kentucky (1984-1988). Dr. Hickey then joined the faculty at the University of Illinois at Chicago (1988-1993). In 1990, he received the Association of Pharmaceutical Scientists (AAPS) Young Investigator Award in Pharmaceutics and Pharmaceutical Technology. He is a Fellow of the Royal Society of Biology (2000), the American Association of Pharmaceutical Scientists (2003), the American Association for the Advancement of Science (2005), and the Royal Society of Biology (2017). He received the Research Achievement Award of the Particulate Presentations and Design Division of the Powder Technology Society of Japan (2012), the Distinguished Scientist Award of the American Association of Indian Pharmaceutical Scientists (2013), the David W. Grant Award in Physical Pharmacy of the American Association of Pharmaceutical Scientists (2015), the Thomas T. Mercer Joint Prize for Excellence in Inhaled Medicines and Pharmaceutical Aerosols of the American Association for Aerosol Research and the International Society for Aerosols in Medicine (2017). He has published numerous papers and chapters (over 250) in the pharmaceutical and biomedical literature, one of which received the AAPS Meritorious Manuscript Award in 2001. He has edited five texts on pharmaceutical inhalation aerosols and co-authored three others on pharmaceutical process engineering, pharmaceutical particulate science, and pharmaco complexity. He holds 25 U.S. patents on a variety of inhaler device technologies, and pulmonary and oral drug delivery formulation technologies. He is founder (1997, and formerly president and CEO, 1997-2013) of Cirrus Pharmaceuticals, Inc., which was acquired by Kemwell Pharma in 2013; founder (2001, and formerly CSO, 2002-2007) of Oriel Therapeutics, Inc, which was acquired by Sandoz in 2010; and founder and CEO of Astartein, Inc. (2013-present). He is a member of the Pharmaceutical Dosage Forms Expert Committee of the United States Pharmacopeia (USP, 2010–2015, Chair of the Subcommittee on Aerosols), and formerly Chair of the Aerosols Expert Committee of the USP (2005-2010). Dr. Hickey conducts a multidisciplinary research program in the field of pulmonary drug and vaccine delivery for treatment and prevention of a variety of diseases.

Dr. Mansour is an active, long-time member of several scientific organizations and elected member to honor societies, including the Sigma Xi Scientific Research Honor Society, Rho Chi Pharmaceutical Honor Society, and Golden Key International Honor Society. As a registered pharmacist for over 20 years, she earned her BS in pharmacy with honors and distinction, a PhD minor in advanced physical and interfacial chemistry (Department of Chemistry), and a PhD major in drug delivery/pharmaceutics (School of Pharmacy) from the University of Wisconsin-Madison. Also at the University of Wisconsin-Madison, she was a clinical instructor for a few years. Having completed postdoctoral fellowships at the University of Wisconsin-Madison and at the University of North Carolina (UNC)-Chapel Hill, she was awarded the UNC-Chapel Hill Postdoctoral Award for Research Excellence from the Office of the Vice-Chancellor, the AAPS Postdoctoral Fellow Award in Research Excellence, and the PhRMA Foundation Postdoctoral Fellowship Award. As an Instructor, she served on the Graduate Faculty at UNC-Chapel Hill. 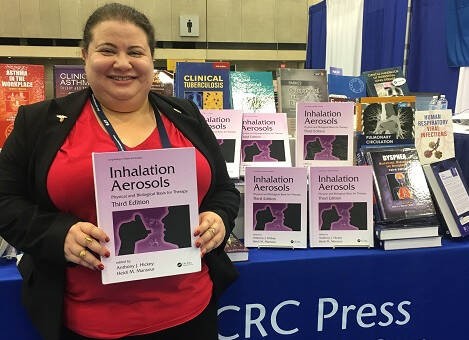