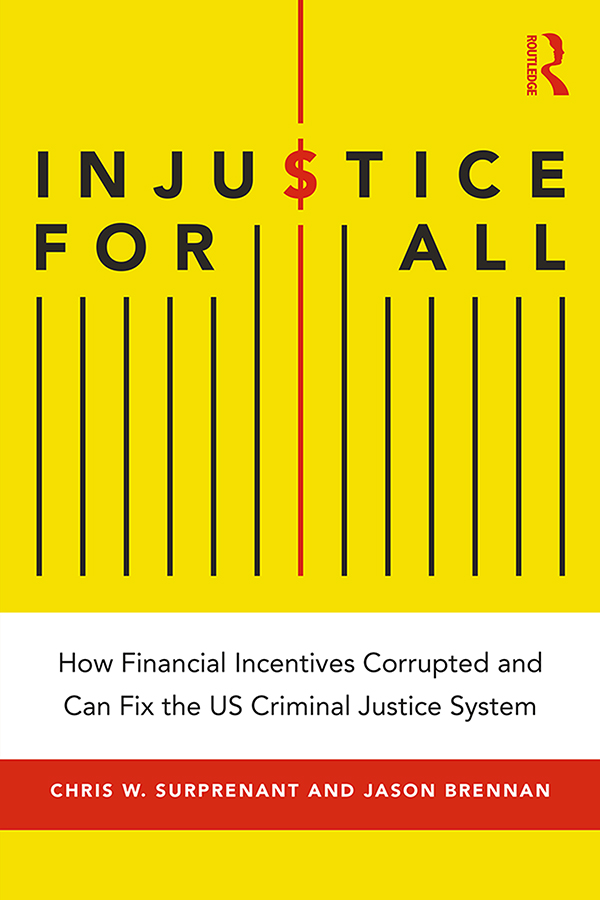 How Financial Incentives Corrupted and Can Fix the US Criminal Justice System, 1st Edition

American criminal justice is a dysfunctional mess. Cops are too violent, the punishments are too punitive, and the so-called Land of the Free imprisons more people than any other country in the world. Understanding why means focusing on color—not only on black or white (which already has been studied extensively), but also on green.

The problem is that nearly everyone involved in criminal justice—including district attorneys, elected judges, the police, voters, and politicians—faces bad incentives. Local towns often would rather send people to prison on someone else’s dime than pay for more effective policing themselves. Local police forces can enrich themselves by turning into warrior cops who steal from innocent civilians.  Voters have very little incentive to understand the basic facts about crime or how to fix it—and vote accordingly. And politicians have every incentive to cater to voters’ worst biases.

systematically diagnoses why and where American criminal justice goes wrong, and offers functional proposals for reform. By changing who pays for what, how people are appointed, how people are punished, and which things are criminalized, we can make the US a country which guarantees justice for all.

"'Follow the money’ isn’t just sound advice for people tracing political corruption or criminal activity. Brennan and Surprenant persuasively demonstrate that understanding financial incentives and how institutions are held accountable is critical for checking the dynamics that lead to mass incarceration and excessive criminalization. This insightful book offers countless examples of the ways in which perverse incentives lead to excessive punishment without bringing public safety or other benefits. If we want to take a more rational approach to criminal justice policy making, analyzing the incentives of institutional actors is the key place to start, as this book shows."

"The authors say interesting and at times provocative things about a number of important topics, and they do so in a clear, accessible, and engaging manner. They make good use of both specific examples and more general statistics and they strike a nice balance between the concrete and the theoretical. I highly recommend this book to anyone who is interested in thinking critically about our criminal justice system."

1. It’s Worse than You Think

Chris W. Surprenant is Professor of Philosophy at the University of New Orleans, where he directs the University Honors Program and is the founding director of the Urban Entrepreneurship and Policy Institute. He is the author of Kant and the Cultivation of Virtue (2014), and editor or co-editor of The Value and Limits of Academic Speech (2018), Rethinking Punishment in the Era of Mass Incarceration (2017), Kant and the Scottish Enlightenment (2017), and Kant and Education: Interpretations and Commentary (2011).

is the Robert J. and Elizabeth Flanagan Family Professor of Strategy, Economics, Ethics, and Public Policy at Georgetown University. He is the author of ten books, including Cracks in the Ivory Tower: The Moral Mess of Higher Education (2019) and Against Democracy (2016).