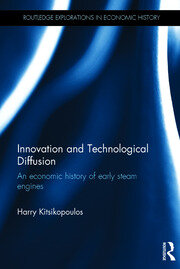 This book deals with two key aspects of the history of steam engines, a cornerstone of the Industrial Revolution, specifically the road that led to its discovery and the process of diffusion of the early steam engines.

The first part of the volume outlines the technological and scientific developments which took place between the 16th and 18th centuries, proving critical for the invention of this strategic technology. The most important question addressed is why did England come up with this innovation first as opposed to other countries (e.g., France, Italy), which were more advanced in terms of knowledge pertinent to it. The second part of the volume traces the process of diffusion of the early steam engines, the Newcomen model, through to 1773, the year prior to the first commercial application of the second generation of steam engines (the Watt model). The process of diffusion is quantified on the basis of a novel method before proceeding with a discussion of the main determinants of this process.

PART I 1. From Hero to Newcomen: The Critical Scientific and Technological Developments That Led to the Invention of the Steam Engine 2. Why did England Invent the Steam Engine? The Role of Science, Economic Incentives, Institutions, and Technical Skills PART II The Diffusion of Newcomen Engines, 1706-73: An Introduction Chapter 3. The Diffusion of Newcomen Engines: A Reassessment 4. The cost of steam vs other power sources in the British economy 5. The role of British engineering skills in driving the diffusion of Newcomen engines 6. Firm size and market demand as determinants of diffusion: The role of the threshold (minimum) level of output