Inside the United Nations
Multilateral Diplomacy Up Close 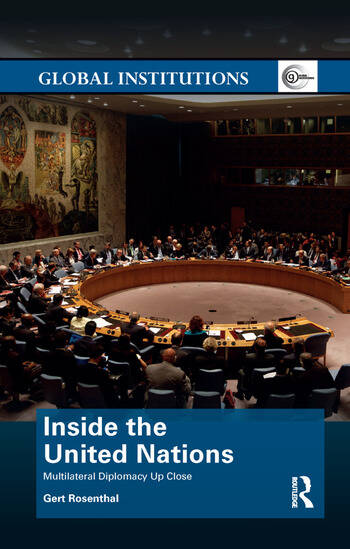 Inside the United Nations: Multilateral Diplomacy Up Close

Inside the United Nations illustrates some of the parameters surrounding consensus-building at the United Nations, seeking to provide new insights beyond what is already known. The author spent twelve years as P.R of Guatemala at the UN, offering him privileged observatories in all three of the main inter-governmental organs: the General Assembly, the Economic and Social Council, and the Security Council.

In this book Rosenthal focuses on six case studies that offer the breadth and scope of what the UN does, and illustrate some of the main elements of the dynamics of consensus-building, providing concrete examples of the ingredients that shape decision-making in a multilateral setting. The chapters:

Providing an insider’s view on the UN and exploring different facets of multilateral diplomacy at the UN, this book will be of great use and interest to scholars of international relations as well as the diplomatic community.

1. The 2000 Millennium Declaration: A General Assembly Summit with far-reaching consequences

2. The 2002 International Conference on Financing for Development

4. ECOSOC in 2003: A principal organ in search of its identity

5. Electoral politics at the United Nations: A contested election in 2006

7. An overview: Some lessons learned

Gert Rosenthal is a Guatemalan economist. He did both his undergraduate and graduate studies at the University of California at Berkeley. He alternated his career between public service in Guatemala and in international organizations. On the former, he was, among other posts Secretary-General of the National Planning and Budgetary Secretariat. On the latter, he worked for the Secretariat of the Central American Common Market before joining the United Nations Economic Commission for Latin America and the Caribbean (ECLAC) where he served as its Executive Secretary from 1988 to 1997. After retiring from the UN secretariat he rejoined his government and served, first, as Permanent Representative of Guatemala to the United Nations, then as Foreign Minister of Guatemala, followed by a second tour of duty to the UN to lead the Guatemalan delegation to the Security Council. His last activity with the United Nations was as Chair of the Advisory Group of Experts for the 2015 review of the organization’s peacebuilding architecture.

‘I highly recommend this volume to anyone who wants to know how the United Nations really works.  Nowhere else could one find so much wisdom about the world body packed into so few pages. From his unparalleled experience representing Guatemala in the Security Council, General Assembly, and ECOSOC, Ambassador Rosenthal draws invaluable lessons for diplomats, policymakers, scholars, and representatives of civil society. Among them is that size is not the only thing that counts at the United Nations. He shows that, with skill and dedication, representatives of small countries can--at times--make a real difference in global diplomacy.’ - Edward C. Luck, Arnold A. Saltzman Professor of Professional Practice, School of International and Public Affairs, Columbia University and former Special Adviser and Assistant Secretary-General, the United Nations

‘This admirably slim, deeply wise volume from one of Latin America’s leading social scientists assesses unsentimentally and in-depth a set of important negotiations in which he was involved at the United Nations, generally in a leading role, over nearly two decades.  Helpfully presented as minutely dissected case studies, Rosenthal makes clear that the stakes in such UN negotiations are above all political, with transparency (at least among insiders) and a "sense of ownership" prized more that the saliency or relevance of outcomes. Nevertheless, whether in the Security Council or one of the UN’s economic or internal management processes, the "sovereign equality" of member states is regularly upended by the UN’s powerful members, whose diplomatic reach to capitals, short-circuiting those in New York, is impressive. The narrative achieves a deep dive into intra-UN dynamics. The UN remains a unique and valuable asset for international relations, but one that serves too often as the theatre for essentially esoteric struggles among those involved with limited impact on the world beyond.’

‘There are always at least two United Nations: the UN of the Secretary General and its operational arms, from peace-keeping to humanitarian aid, and the UN made up of each of its 193 member countries.  The first is highly visible and often blamed when things go wrong around the world; the work of the second, with the exception perhaps of the Security Council, is much less well understood. Gert Rosenthal has written a fascinating and important book about the politics and practicalities of diplomacy between countries at the UN, and how these countries interact with the UN secretariat. Very few people can have seen this hidden landscape from as many different perches as Ambassador Rosenthal, who has facilitated resolutions on sensitive issues in the General Assembly, served as President of the Economic and Social Council, as Chair of the Fifth Committee which deals with the UN's budget, and as member of the Security Council during the early years of the Syria conflict. This text will be an indispensable primer for diplomats and policy makers at the UN as much as for students and scholars of multilateral diplomacy.’