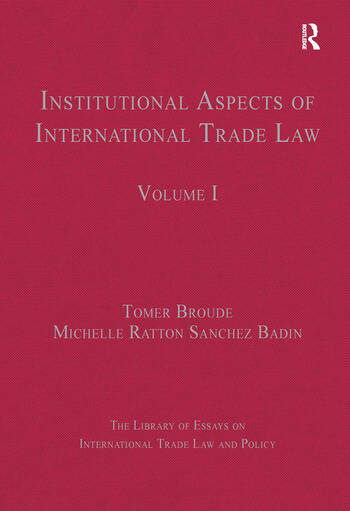 The importance of the institutional dimensions to international trade law over the last decades is brought to light in this volume of previously published articles. The collection focuses on the World Trade Organization (WTO), the most important institution in international trade, and includes a selection of key contributions to the field. The approach is multi-disciplinary, encompassing mostly law, but also political science and economics, and the issues addressed are significant and diverse: the overall legitimacy and effectiveness of the WTO, the relationship between legal and judicial branches of the WTO, the path to membership in the organization, the WTO’s institutional complex of councils, committees and panels, the role of the WTO secretariat, and the relationship between the WTO and regional trade frameworks. The combined strengths of the articles in the collection, which reveals a dynamic, multi-layered and complex institutional structure, make this volume of special importance to students and practitioners of international trade or international relations.

Contents: Introduction; Part I The Logic of Multilateral Institutionalization in International Trade: The transformation of world trade, Joost Pauwelyn. Part II Dynamics of Membership and Decision-Making in the WTO: Decision-making in the World Trade Organization: is the consensus practice of the World Trade Organization adequate for making, revising and implementing rules on international trade?, Claus-Dieter Ehlermann and Lothar Ehring; The WTO single undertaking as negotiating technique and constitutive metaphor, Robert Wolfe; Everything you always wanted to know about WTO accession (but were afraid to ask), Olivier Cattaneo and Carlos A. Primo Braga. Part III The Judicial Branch: the WTO Dispute Settlement System: The rule of lawyers and the ethos of diplomats: reflections on the internal and external legitimacy of WTO dispute settlement, J.H.H. Weiler; Judicial lawmaking at the WTO: discursive, constitutional, and political constraints, Richard H. Steinberg; No outsourcing of law? WTO law as practiced by WTO courts, Petros C. Mavroidis; Bargaining in the shadow of the law: early settlement in GATT/WTO disputes, Marc L. Busch and Eric Reinhardt. Part IV Behind the Scenes: the Secretariat and Specialized Communities: The hidden world of WTO governance, Andrew Lang and Joanne Scott; Overlap management in the World Trade Organization: secretariat influence on trade-environment politics, Sikina Jinnah. Part V WTO Interactions with National and Regional Institutions: Parliamentary oversight of WTO rule-making: the political, normative and practical contexts, Gregory Shaffer; The rise of national regulatory autonomy in the GATT/WTO regime, Michael Ming Du; Dispute settlement regimes intermingled: regional trade agreements and the WTO, Gabrielle Marceau and Julian Wyatt. Part VI Transparency, Participation and Reform: Transparency and participation in the World Trade Organization, Steve Charnovitz; The future of the WTO: the case for institutional reform, Debra P. Steger; Name index.

Tomer Broude is Sylvan M. Cohen Chair in Law, Faculty of Law and Department of International Relations, Hebrew University of Jerusalem, and Academic Director of the Minerva Center for Human Rights, Israel. Michelle Ratton Sanchez Badin is Professor of Law at FGV Sao Paulo School of Law (Direito GV), Brazil, and a co-founding member of the Centre on Global Law at Direito GV.