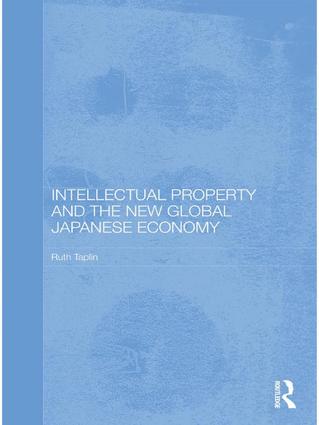 The Japanese economy is the second largest in the world and is becoming once more one of the most competitive. Despite the stagnation and deflation experienced during the 1990s, Japan has progressively become more aware of the need to be a global player, in particular under the radical administration of former Prime Minister Koizumi. A vigorous approach to intellectual property borrowed from the US and Europe, stressing the importance of innovation, assisted in kick-starting the Japanese economy again and has sustained its increasingly high performance. This book examines how Japan has used this new approach to intellectual property (IP) to revitalise its economy. It explains how IP has traditionally been used in Japan, and goes on to identify the ways in which this has changed in recent years, identifying the different facets of IP utilised to propel the Japanese economy to new heights: Firstly, by promoting IP through Technical Licensing Organisations (TLO) laws and uniting the universities with the needs of industry. Secondly, via radical changes to employees’ rights to compensation through the landmark decisions made by the Tokyo District Court. Thirdly, by the streamlining of patenting applications and procedures through the Tokyo and Osaka District IP Courts, and the Japanese Patent Office. Fourthly, by internationalising its capital markets, as displayed by the cooperation between the Tokyo Stock Exchange and the London Stock Exchange (LSE) and other bourses. Overall, this book is essential reading for all those interested in understanding the modern Japanese economy, and how it is adapting to exploit the opportunities and challenges of an increasingly globalised world.

'The book is recommended reading for those interested in understanding how the Japanese economy is changing, the evolving role of IP in revitalizing the economy, and how Japan is attempting to adapt to the opportunities and challenges of an increasingly globalised world.' - Sean Curtin, Japan Society Book Reviews,December 2008

"Overall this book is essential reading for all those interested in understanding the modern Japanese economy and how it is adapting to exploit the opportunities and challenges of an increasingly globalised world" - YouTube Review of Favourite Book, December 2014

1. Roots of IP Drive and Economic Globalization 2. Japan as an IP Nation 3. Historical Perspective of the Economy and IP 4. Cross-border IP and Fast Tracking of Patent Applications 5. Changes to the Patent Court and Employee’s Rights to Compensation 6. Changes in Japanese Corporate Governance 7. Future Developments in the Japanese Exchanges 8. Conclusion

Ruth Taplin is the author/editor of over 200 articles and 14 books. The most recent are: Exploiting Patent Rights and a New Climate for Innovation in Japan; Valuing Intellectual Property in Japan, Britain and the United States; Risk Management and Innovation in Japan, Britain and the United States; Japanese Telecommunications: Market and Policy in Transition; Outsourcing and Human Resource Management: An International Survey;and Innovation and Business Partnering in Japan, Europe and the United States (the last five also published by Routledge). Professor Taplin has been Editor of the Journal of Interdisciplinary Economics for 14 years. She is Director of the Center for Japanese and East Asian Studies, which won Exporter of the Year in Trading/Pathfinder in 2000 for the UK. Currently she is a Research Fellow at Birkbeck College, University of London and the University of Leicester, and has been a Visiting Professor and Research Fellow at a number of universities in the UK and abroad.