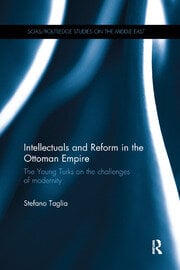 Intellectuals and Reform in the Ottoman Empire: The Young Turks on the Challenges of Modernity

This book uncovers Young Turk political and social ideas at the end of the nineteenth century, during the intellectual phase of the movement.

Analysing the life in exile of two of the most charismatic leaders of the Young Turk movement, Ahmed Rıza and Mehmet Sabahattin, the book unravels their plans for the future of the Ottoman Empire, covering issues of power, religion, citizenship, minority rights, the role of the West, and the accountability of the Sultan. The book follows Rıza and Sabahattin through their association with philosophical circles, and highlights how their emphasis on intellectualism and elitism had a twofold effect. On the one hand, seeing themselves as enlightened and entrusted with a mission, they engaged in enduring debates, leaving an important legacy for both Ottoman and Republican rule. On the other hand, the rigidity resulting from elitism and intellectualism prevented the conception of concrete plans for change, causing a schism at the 1902 Congress of Ottoman Liberals and marking the end of the intellectual phase.

Introduction 1 The Ottoman Empire under Sultan Abdulhamit II 2 Young Turk Émigrés, the Press and the Parisian Milieu 3 Ahmet Riza and Mechveret 4 Mehmet Sabahattin and Social Science 5 The End of an Idea, the 1902 Congress of Ottoman Liberals in Paris Conclusion

Stefano Taglia is Fellow at the Oriental Institute of the Academy of Sciences of the Czech Republic. His research interests are in the fields of nationalism and minorities in the Ottoman Empire.