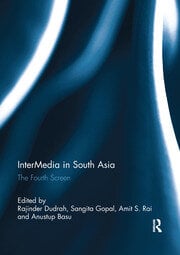 The emergence of new media today in South Asia has signalled an event, the meaning of which remains obscure but whose reality is rapidly evolving along gradients of intensity and experience. Contemporary media in and from South Asia have come to sense a new arrangement of value, sensation, and force - new forms of becoming that might be usefully termed as 'media ecologies'. This evolution from nation-based forms of communication (Doordarshan, All India Radio, the "national" feudal romance) to simultaneous global ones conform and mutate the structures of feeling of local, national, diasporic and transnational belonging. This collection of original essays is concerned with understanding how people are making meaning from the new media and how subaltern tinkering (pirating, peer to peer file sharing, hacking, noise jamming, indymedia, etc.) does things to and in the new media. This exciting works helps us to make sense of the creation of new publics, new affects and new experiences of pleasure and value in convergences of intermedia in a fast developing South Asia context.

This book was originally published as a special issue of South Asian Popular Culture.

Rajinder Dudrah is Senior Lecturer and Director of the Centre for Screen Studies at the University of Manchester, UK. He has researched and published widely in film, media and cultural studies in international journals. His books include Bollywood: Sociology Goes to the Movies (2006), Bhangra: Birmingham and Beyond (2007), and The Bollywood Reader (2008).

Sangita Gopal is an Assistant Professor of English and Cinema Studies at the University of Oregon, USA. She has researched and published in the fields of postcolonial studies, film studies and feminist theory. Her publications include an edited volume of essays, Global Bollywood: Travels of Hindi Film Music (2008) and Conjugations: Family and Film Form in New Bollywood Cinema (2011). She is currently working on a project entitled Mutant Media that looks at issues of intermediality and time in a postcolonial context.

Amit S. Rai is Senior Lecturer in New Media and Communication at Queen Mary, University of London, UK. He has published across the range of queer, feminist, postcolonial, and media studies, increasingly focusing on questions of affect, sensation, technology, and political economy. He is the author of Untimely Bollywood: Globalization and India's New Media Assemblage (2009). He is currently at work on a study of Indian mobile phone media and its emergent ecology of sensation.

Anustup Basu is Assistant Professor in English and Cinema Studies at University of Illinois, USA, at Urbana-Champaign. His essays on cinema, new media, and philosophy/politics of information have appeared in various international journals. He is the author of Bollywood in the Age of New Media: The Geo-televisual Aesthetic (2010).