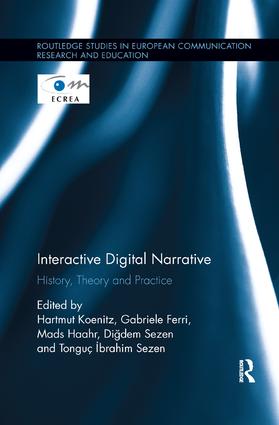 The book is concerned with narrative in digital media that changes according to user input—Interactive Digital Narrative (IDN). It provides a broad overview of current issues and future directions in this multi-disciplinary field that includes humanities-based and computational perspectives. It assembles the voices of leading researchers and practitioners like Janet Murray, Marie-Laure Ryan, Scott Rettberg and Martin Rieser. In three sections, it covers history, theoretical perspectives and varieties of practice including narrative game design, with a special focus on changes in the power relationship between audience and author enabled by interactivity. After discussing the historical development of diverse forms, the book presents theoretical standpoints including a semiotic perspective, a proposal for a specific theoretical framework and an inquiry into the role of artificial intelligence. Finally, it analyses varieties of current practice from digital poetry to location-based applications, artistic experiments and expanded remakes of older narrative game titles.

"The volume serves as a useful introduction for those new to IDN but perhaps even more as a route into key issues for those more familiar with it. By mixing work from seminal theorists in the field with seasoned creative practitioners, and exploring many examples of IDN, it fulfils its aim of providing a snapshot of the status quo in research while compelling readers to debate its future. […] The future of IDN research and practice is on a surer footing with its publication." -Marguerite Barry, DIEGESIS (5.1)

Hartmut Koenitz is Assistant Professor of Mass Media Arts in the Grady College of Journalism and Mass Communication at the University of Georgia, USA.

Gabriele Ferri is a Postdoctoral Researcher in the School of Infomatics and Computing at Indiana University Bloomington, USA.

Mads Haahr is Lecturer in the School of Computer Science and Statistics at Trinity College Dublin, Ireland.

Diğdem Sezen is Researcher in the Faculty of Communications at Istanbul University, Turkey.

Tonguç İbrahim Sezen is Lecturer in the Faculty of Communications at Istanbul Bilgi University, Turkey.

Published in association with the European Communication Research and Education Association (ECREA), books in the series make a major contribution to the theory, research, practice and/or policy literature. They are European in scope and represent a diversity of perspectives.