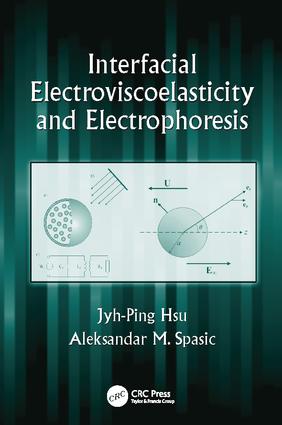 In the 20 years since the pilot plant experiments used to develop the concept of electroviscoelasticity, inroads have been made in the understanding of its many related processes. Interfacial Electroviscoelasticity and Electrophoresis meets a massive scientific challenge by presenting deeper research and developments in the basic and applied science and engineering of finely dispersed particles and related systems.

Introducing more profound and in-depth treatises related to the liquid-liquid finely dispersed systems (i.e., emulsions and double emulsions), this book describes a new theory developed through the authors’ work. These findings are likely to impact other research and applications in a wide array of other fields, considering that the modeling of liquid-liquid interfaces is key to numerous chemical manufacturing processes, including those used for emulsions, suspensions, nanopowders, foams, biocolloids, and plasmas. The authors cover phenomena at the micro, nano, and atto-scales, and their techniques, theory, and supporting data will be of particular interest to nanoscientists, especially with regard to the breaking of emulsions.

Built around the central themes of hydrodynamic, electrodynamic, and thermodynamic instabilities that occur at interfaces, this book addresses recently developed concepts in the physics, chemistry, and rheological properties of those well-studied interfaces of rigid and deformable particles in homo- and hetero-aggregate dispersed systems. The book also introduces the key phenomenon of electrophoresis, since it is widely adopted either as an analytical tool to characterize the surface properties of colloid-sized particles or in the separation and purification process of both laboratory and industrial scales. The applications and implications of the material presented in the book represent a major contribution to the advanced fundamental, applied, and engineering research of interfacial and colloidal phenomena.

Classification Based on Scales

Classification Based on Geometry

Classification Based on Origin of Forces

Classification Based on Physical-Chemical Processes

Classification Based on Entities