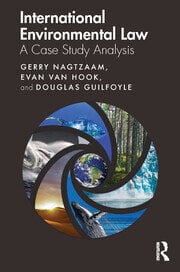 This book seeks to better understand how International Environmental Law regimes evolve. The authors address throughout the major environmental, economic, and political tensions that have both shaped and constrained the evolution of international environmental policy within regimes, and its expression in international legal rule and norm development.

Readers will gain an increased understanding of the growing role played by non-state actors in global environmental governance, including environmental non-government organisations, scientists, the United Nations, and corporations. The authors also look ahead to the future of International Environmental Law, evaluating key challenges and decisions that the discipline will face.

The text is clear, concise, and accessible. It is ideally suited to students and professionals interested in International Environmental Law, and individuals who are intrigued by this dynamic area of law.

Gerry Nagtzaam is Associate Professor at the Monash Law Faculty. His research is interdisciplinary in nature and he publishes in the fields of International Environmental Law, international relations theory, and terrorism. His publications include The Making of International Environmental Treaties (Edward Elgar, 2009); Decision-making and Radioactive Waste Disposal (Routledge, 2016); and From Environmental Action to Ecoterrorism (Edward Elgar, 2017) as well as numerous articles and chapters on biodiversity loss, global treaty formation, and ecoterrorism. He has consulted with numerous organisations, including the Victorian Environmental Protection Agency.

has led Health, Safety, Environment, Product Stewardship & Sustainability for Honeywell International, a Fortune 100 Company, since 2004. He has lectured on International Environmental Law at Columbia Law School and the United Nations ITR and was a credentialed attendee at UN FCCC COP 23 and COP 24. He is a graduate of Yale Law School and is both a former partner in the law firm of Sidley & Austin and Assistant Commissioner of the New Jersey Department of Environmental Protection. He is on the Boards of NTESS, LLC., and the Housatonic Valley Association.

is Associate Professor of International and Security Law in the School of Humanities and Social Sciences at the University of New South Wales Canberra. He publishes in the fields of law of the sea and maritime security, and international and transnational criminal law. His publications include Shipping Interdiction and the Law of the Sea (Cambridge University Press, 2009) and numerous articles and chapters on maritime security, maritime piracy, and the South China Sea dispute. He has consulted to governments and international organisations, and previously held academic posts at the law faculties of Monash University and University College London.