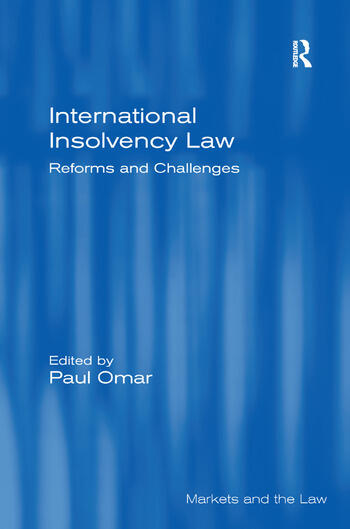 International insolvency is a newly-established branch of the study of insolvency that owes much to the phenomenon of cross-border incorporations and the conduct of business in more than one jurisdiction. It is largely the offspring of globalization and involves looking at both law and economic rules. This book is a compendium of essays by eminent academics and practitioners in the field who trace the development of the subject, give an account of the influences of economics, legal history and private international law, and chart its relationship with finance and security issues as well as the importance of business rescue as a phenomenon. Furthermore, the essays examine how international instruments introduced in recent years function as well as how the subject itself is continually being innovated by being confronted by the challenges of other areas of law with which it becomes entangled.

Paul Omar is a Barrister and Senior Lecturer in Law at the University of Sussex, UK.

'This fascinating collection offers insights from a range of insolvency specialists. The beauty of the text lies in the diversity of coverage. Apart from the mainstream issues, we find perceptive analysis of bank insolvency, franchise distress, the impact of insolvency on employees and the interface with environmental law. The comparative input is excellent. Overall, an essential addition to the library of any insolvency scholar.' David Milman, Lancaster University, UK '...highly recommended both to read and as a reference source. [this book] provides a lead to numerous other issues and ideas, throughout the insolvency world.' Australian Journal of Corporate Law