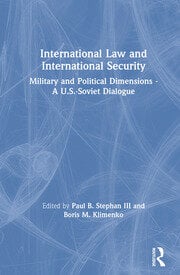 This volume brings together experts and political actors from the United States and the USSR to assess the status of international law in the post-Cold War era with the intention of contributing ideas, judgements, and proposals tempered by experience. The topics covered range from terrorism to peaceful conflict resolution; from the renunciation of aggression to the right of self-defence; from chemical, biological, and nuclear weapons limitations to problems of verification; and from the military use of space to the right of political self-determination. Each chapter features contributions by both US and Soviet experts who have themselves participated in high-level policy making and international negotiations in the area (including, for example, the ABM, SALTI, SALTII, CFE, and START talks).

The new edition of this popular text explores the relationship between American politics and films of all types from comedies and dramas to biographies and documentaries. A new chapter covering 2000-2010 and up to 2013 updates the decade-by-decade survey of politics in films from Birth of a Nation to The Wolf of Wall Street. The revision covers recent developments in the nexus between film and politics, such as the Citizens United Supreme Court decision and the heated objections by senior politicians to the controversial film Zero Dark Thirty. The authors provide a framework that readers can use to analyze the political content of films, film technique, and political messaging. They analyze the effects of real-world politics on Hollywood and how various film techniques are used for messaging in political films. An entirely new topical chapter covering the recent resurgence of the apocalyptic and disaster film genre has been added to the Second Edition, along with new coverage of Iraq-Afghan war movies, and updated chapters on race, political documentaries, and women in political films. A guide to the most current web-based film resources and political filmography complete this indispensable overview for researchers, students, and instructors of film studies. An online Instructor's Manual with discussion questions is available to adopters.