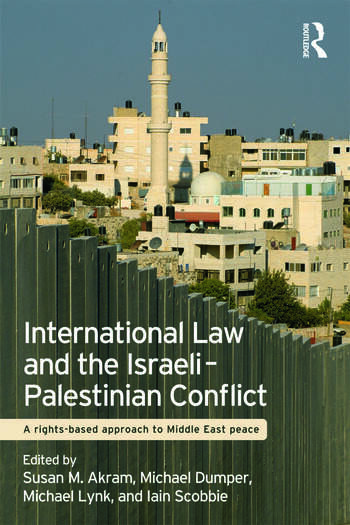 International Law and the Israeli-Palestinian Conflict: A Rights-Based Approach to Middle East Peace

The Israeli-Palestinian conflict has long been intertwined with, and has had a profound influence on, the principles of modern international law. Placing a rights-based approach to the Israeli-Palestinian conflict at the centre of discussions over its peaceful resolution, this book provides detailed consideration of international law and its application to political issues.

Through the lens of international law and justice, the book debunks the myth that law is not useful to its resolution, illustrating through both theory and practice how international law points the way to a just and durable solution to the conflict in the Middle East. Contributions from leading scholars in their respective fields give an in-depth analysis of key issues that have been marginalized in most mainstream discussions of the Israeli-Palestinian conflict:

Written in a style highly accessible to the non-specialist, this book is an important addition to the existing literature on the subject. The findings of this book will not only be of interest to students and scholars of Middle Eastern politics, International Law, International Relations and conflict resolution, but will be an invaluable resource for human rights researchers, NGO employees, and embassy personnel, policy staffers and negotiators.

Susan M. Akram is Clinical Professor at Boston University School of Law, teaching immigration law, comparative refugee law, and international human rights law, and supervising students handling refugee and asylum cases in BU’s asylum and human rights program. She has spoken and published widely in the fields of immigration law, refugee law and human rights, and has taught at the American University in Cairo and the Al-Quds/Palestine School of Law in East Jerusalem.

Michael Dumper is Professor of Politics at Exeter University. His main area of research has been on Final Status Issues in the Middle East peace process and he is author of The Future of the Palestinian Refugees: Towards Equity and Peace (2007) and The Politics of Sacred Space: The Old City of Jerusalem and the Middle East Conflict (2001), as well as editor of the Routledge Studies on the Arab-Israeli Conflict series.

Michael Lynk is Associate Dean, Academic and Associate Professor in the Faculty of Law at The University of Western Ontario in London, Ontario, Canada. He has taught labour, human rights, constitutional and administrative law, and is an editor of the Canadian Labour and Employment Law Journal as well as the author of numerous books. He has also worked with the United Nations in the Middle East, where he has published academic legal articles on the area and he is a regular commentator in the print and broadcast media.

Iain Scobbie is Sir Joseph Hotung Professor in Law, Human Rights and Peace Building in the Middle East in the School of Law at SOAS. Specialising in Public international law, especially its relation to the Israel/Palestine situation; theory of international law; international humanitarian law; the law and practice of the International Court of Justice, he is a member of the Scientific Advisory Board of the European Journal of International Law, and of the Commissioning Panel of the AHRB/ESRC Religion and Society programme.