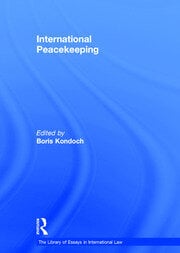 Peacekeeping has been the technique most frequently used by, and associated with, the United Nations to end conflicts and to preserve peace. In addition, international and regional organizations have also performed peacekeeping functions. Since the establishment of the first UN peacekeeping mission, UNEF I, in 1956, international lawyers have raised questions about the legal aspects of these operations. Traditionally, they analyzed the constitutional basis for peacekeeping and tried to allocate the authority under the UN Charter for peacekeeping among the Security Council, the General Assembly and the Secretary General. They discussed the use of force by peacekeepers, the applicability of international humanitarian law, as well as the responsibilities and liabilities of peacekeepers. Since the end of the cold war, peacekeeping operations have become more complex. In the first forty years, peacekeepers functioned mainly as buffer zones between warring parties and monitored cease-fires. Nowadays, they are increasingly engaged in internal rather than international conflicts and perform a multitude of tasks. Among others, they act as civilian administrators, oversee elections and monitor human rights. These changes have raised new legal problems. Which human rights obligations exist for peacekeepers? Do peacekeepers have to intervene if they witness war crimes and acts of genocide? How are they protected under international law? What is the legal framework of UN administrations like in Kosovo and East Timor? In order to enhance a better understanding of these legal issues arising from peacekeeping operations, a collection of articles written by the leading experts in the field have been compiled in the volume, International Peacekeeping.

Boris Kondoch is a Professor at University of Peace, South Korea.

'This book is an unequalled coherent work which illustrates the range of problems of Peacekeeping Operations comprehensively...this publication has the potential to become a standard work in the area of international peacekeeping.' The Military Law and the Law of War Review