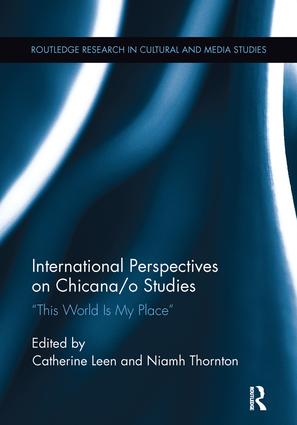 This World is My Place, 1st Edition

This volume examines how the field of Chicana/o studies has developed to become an area of interest to scholars far beyond the United States and Spain. For this reason, the volume includes contributions by a range of international scholars and takes the concept of place as a unifying paradigm. As a way of overcoming borders that are both physical and metaphorical, it seeks to reflect the diversity and range of current scholarship in Chicana/o studies while simultaneously highlighting the diverse and constantly evolving nature of Chicana/o identities and cultures.

Various critical and theoretical approaches are evident, from eco-criticism and autoethnography in the first section, to the role of fiction and visual art in exposing injustice in section two, to the discussion of transnational and transcultural exchange with reference to issues as diverse as the teaching of Chicana/o studies in Russia and the relevance of Anzaldúa’s writings to post 9/11 U.S. society.

"This exciting and timely anthology provides great insight into the growing international appeal of Chicana/o Studies, a field previously believed to be of merely regional and local interest within the United States." --Guisela Latorre, The Ohio State University, USA

"Leen and Thornton’s volume represents a major new contribution to Chicano/a Studies in English. While offering a clear and focused investigation of Chicano identities and culture, it is sensitive to the contingent, evolving and multifaceted nature of those identities and their cultural manifestations. Unusually international in approach and with a wide range of excellent contributors, the book covers areas as diverse as literature, art, film, institutional programmes, everyday life practices and wider matters of cultural identity and identification. It is essential reading for all those interested in the field." --Philip Swanson, The University of Sheffield, UK

"The essays found in this volume pioneer a much needed insight into American studies around the world. With the increased interest in the study of U.S. Latino/a literature, and the internationalization of many U.S. Latino/a writers…Whether intentional or not, this edition has explored more heavily the works and contributions of Chicanas and offers a refreshing and renewed view of how Chicano/a’s thematic interests and struggles are no longer a regional concern." - Elena Foulis, Ohio State University

Catherine Leen is a Lecturer in the Department of Spanish at the National University of Ireland, Maynooth, specialising in Mexican and Chicana/o literature and cinema and Argentine and Paraguayan cultures. Her recent publications include works on Sandra Cisneros and Guillermo Gómez-Peña.

Niamh Thornton is a Senior Lecturer in Hispanic Studies and Film at the University of Ulster, Northern Ireland. She is a Latin Americanist with a particular focus on Mexican film and literature and a key interest in the representations of conflict. She has also written about queer representations and cyberculture.