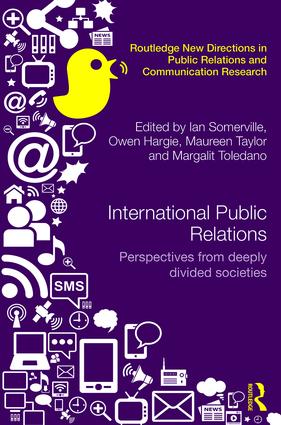 International Public Relations: Perspectives from deeply divided societies is positioned at the intersection of public relations (PR) practice with socio-political environments in divided, conflict and post-conflict societies. While most studies of PR focus on the activity as it is practiced within stable democratic societies, this book explores perspectives from contexts that have tended to be marginalized or uncharted.

Presenting research from a diverse range of societies still deeply divided along racial, ethnic, religious or linguistic lines, this collection engages with a variety of questions including how PR practice in these societies may contribute to our understanding of PR theory building. Importantly, it highlights the role of communication strategies for actors that still deploy political violence to achieve their goals, as well as those that use it in building peace, resolving conflict, and assisting in the development of civil society.

Featuring a uniquely wide range of original empirical research, including studies from Israel/Palestine, Mozambique, Northern Ireland, former Yugoslavia, former Czechoslovakia, Spain, Malaysia and Turkey, this groundbreaking book will be of interest not only to scholars of public relations, but also political communication, international relations, and peace and conflict studies.

With a Foreword by Krishnamurthy Sriramesh, Editor of The Global Public Relations Handbook

The supply for knowledge on international public relations has certainly not kept pace with the increased demand from practice. So, every attempt to add to the body of knowledge should be welcomed with enthusiastic support. This volume goes beyond that basic need by setting new vistas for future studies with the goal of expanding horizons. All those who are passionate about global public relations should applaud every such attempt at building a holistic and comprehensive body of knowledge that will also have relevance to practice. - From the Foreword by Krishnamurthy Sriramesh, Purdue University, USA

'This is an important contribution to public relations scholarship as it strongly positions the field outside the liberal democratic and corporatist norm, with emphasis on dialogue in divided societies supported by national and situational case studies.' - Tom Watson, Emeritus Professor, Faculty of Media & Communication, Bournemouth University, UK

'This book opens up ways of seeing how public relations and communication operates in complex, fraught environments where the idea of setting clear objectives, targeting audiences, delivering slick messages, are continually undermined by the fluid contexts of conflict and division. It will be an important addition to the growing body of work on public relations beyond the organisational context.' - Lee Edwards, Associate Professor, Communication Studies and PR, University of Leeds, UK

Ian Somerville is a Reader in Media and Communication at the University of Leicester, UK.

is Professor of Communication at Ulster University, UK.

is Director of the School of Advertising and Public Relations in the College of Communication and Information, at the University of Tennessee, USA.

, APR, is a senior lecturer of Management Communication at the Waikato Management School, New Zealand.