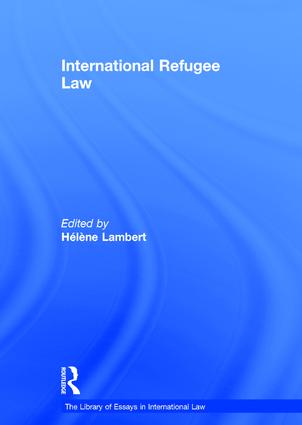 The essays selected and reproduced in this volume explore how international refugee law is dynamic and constantly evolving. From an instrument designed to protect mostly those civilians fleeing the worse excesses of World War II, the 1951 Refugee Convention has developed into a set of principles, customary rules, and values that are now firmly embedded in the human rights framework, and are applicable to a far broader range of refugees. In addition, international refugee law has been affected by international humanitarian law and international criminal law (and vice versa). Thus, there is a reinforcing dynamic in the development of these complementary areas of law. At the same time, in recent decades states have shown a renewed interest in managing migration, thereby raising issues of how to reconcile such interests with refugee protection principles. In addition, the emergence of concepts of participation and responsibility to protect promise to have an impact on international refugee law.

'…will be useful to all those wishing to acquire a good knowledge of the main international issues concerning refugee protection in international law, and … a useful tool for the researcher, accessing the relevant literature on the subject, and as a source for further research.' International Journal of Refugee Law 'Lambert's ideas and this collection of essays are realistic and interesting. Anyone who wishes to explore the concept involved with international refugee law and should give Lambert's volume consideration…' Law and Politics Book Review

Hélène Lambert is Reader in Law at the University of Westminster, UK

The Library of Essays in International Law

The Library of Essays in International Law