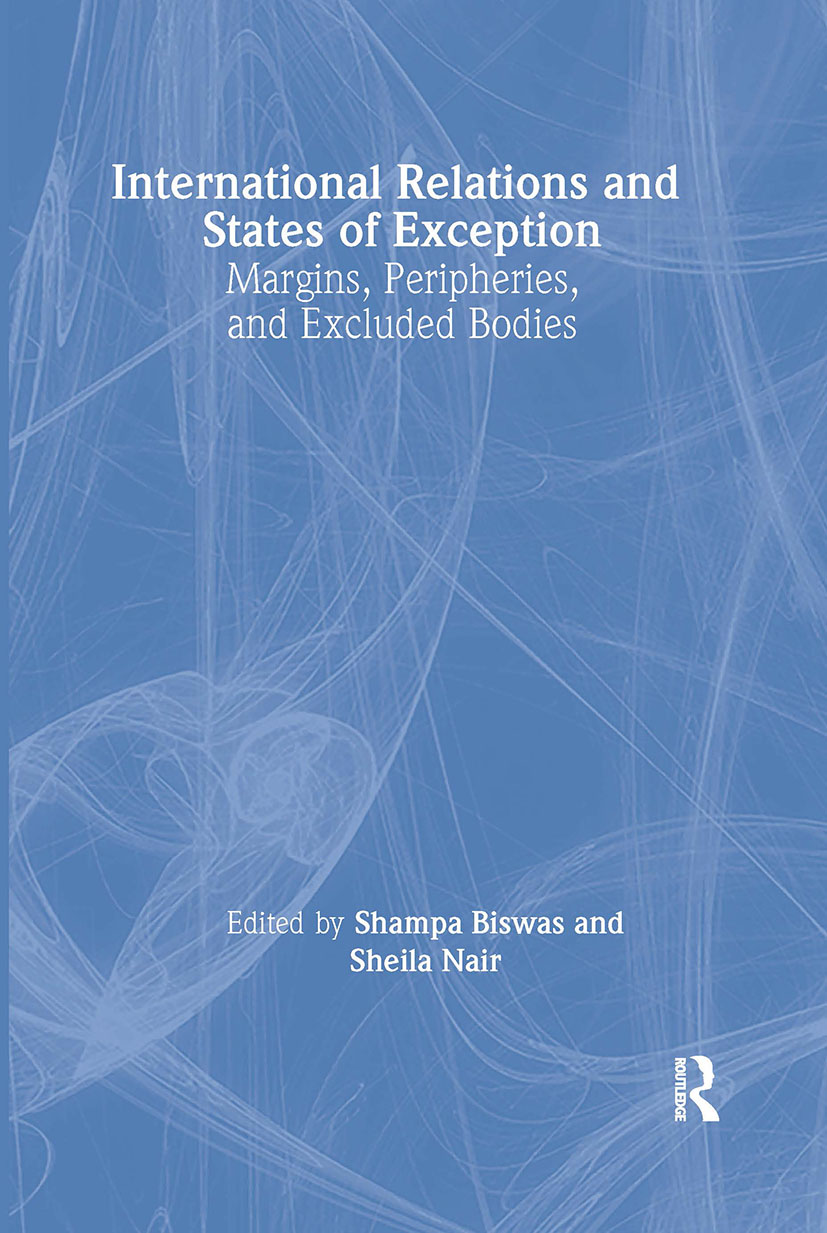 International Relations and States of Exception

Critically but sympathetically interrogating Italian philosopher Giorgio Agamben’s analysis of the logic of sovereign power, this volume draws attention to the multiple zones of exclusion in and through which contemporary international politics constitutes itself.

Beginning from the margins and peripheries of world politics, this book emphasises the colonial processes through which contemporary "third world" spaces of exception have been shaped and particular bodies made susceptible to the conditions of "bare life". The authors contend that these bodies inhabit a variety of spaces or "zones of indistinction" that include political detainees, refugees, asylum-seekers, poor migrants, sweatshop workers, and unassimilated indigenous populations. These are the "expendable bodies" that the territorial and market-driven logic of current international relations simultaneously produces, polices and excludes. Focussing on the locally and socio-historically specific ways that sovereign power works, the individual chapters provide the volume with a wide geographical reach. Drawing on diverse approaches, this text constitutes an important intervention in critical international relations, providing grounded theory and sophisticated analyses of how contemporary international relations works through the production of ‘exceptions’.

"By focusing on how contemporary political communities and discourses of security are constituted by the movements of some of the world's most vulnerable people, this collection of essays not only adds significantly to theoretical and empirical debates about our post-9/11 world. It serves as a critical supplement to state-centric, territorial understandings of international politics, one that demands that we re-imagine what IR theory tells us about the relationships between sovereignty, subjectivity, and ethics." - Cynthia Weber, Lancaster University, UK

"International Relations and States of Exception is a series of brilliant investigations into the simultaneous production of the legal and the illegal, citizen and terrorist, and states and the stateless. Deftly weaving the insights of Agamben, Said, Foucault, Schmitt, Mbembe and Ranciere through the experiences of refugees, migrants, the undocumented, guest workers, terrorists and the indigenous, this indispensable work illuminates the violent making and remaking of our world. From the displaced in northern Sri Lanka to the terrified Indonesian maid servant in a high-rise in Kuala Lumpur to the dispensable colored bodies in Bhopal, New Orleans, Guantanamo and Amazonia, the various chapters raise disturbing questions, and offer powerful new ways to resist the reduction of the international to the security of states and the interests of the rich." - Sankaran Krishna, University of Hawai`i at Manoa, USA

"This timely collection of essays … make an important contribution to IR and international theory. In highlighting the oft-neglected or forgotten aspects of the complex world we inhabit today, the book reminds scholars and citizens alike that there is much more to IR than simply the study of powerful states and their state-to-state relationships." - Yee-Kuang Heng, Cambridge Review of International Affairs, Vol 23, 4, December 2010

Shampa Biswas is Associate Professor of Politics and Director of Global Studies at Whitman College in Walla Walla, Washington, U.S.A. Dr. Biswas has worked and published extensively in the areas of postcolonial international relations, critical security studies and the politics of development.

Sheila Nair is Professor of Politics and International Affairs at Northern Arizona University, USA. Dr. Nair co-edited the volume, Power, Postcolonialism and International Relations: Reading Race, Gender and Class (Routledge 2002). She has also written and published on postcolonial human rights and protest movements, nationalism, and Malaysian politics among other topics.