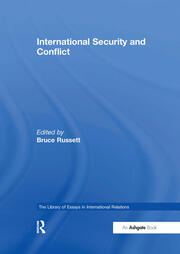 This important collection of classic articles and papers presents a variety of perspectives on key topics in international security and conflict. These include how the structure of the international system constrains nations’ choices, how domestic politics may affect decisions on war and peace, how individual and small group behaviour can affect foreign policy, and how international organizations can affect the security of states and peoples. Some of the selections are classics, but most represent recent research and analysis. They draw on international scholars working from different kinds of theories (realist, liberal-institutionalist and constructivist) and research methods to ask why nation-states may fight violently or stay at peace.

Contents: Series preface; Introduction; Part I How the Structure of the International System Constrains Nations' Choices: Theories of war in an era of leading-power peace, Robert Jervis; The future of the American pacifier, John Mearsheimer; The stability of a unipolar world, William C. Wohlforth; Legitimacy and the use of force: can the circle be squared?, Andrew Hurrell; Escape from the state of nature: authority and hierarchy in world politics, David A. Lake; Same war - different views: Germany, Japan, and counterterrorism, Peter J. Katzenstein. Part II How Domestic Politics May Affect Decisions on War and Peace: The democratic advantage: institutional foundations of financial power in international competition, Kenneth A. Schultz and Barry R. Weingast; Seeking peace in a post-Cold War world of hegemony and terrorism, John R. Oneal and Bruce Russett; The antinomy of democratic peace, Harald MÃ¼ller; The democratic peace theory reframed: the impact of modernity, Azar Gat; The clash of civilizations?, Samuel P. Huntington. Part III How Individual and Small Group Behaviour Can Affect Foreign Policy: Conceptual models and the Cuban missile crisis, Graham T. Allison; The integrative complexity of American decision makers in the Cuban missile crisis, Karen Guttieri, Michael D. Wallace, and Peter Suedfeld; Democratic leaders and the democratic peace: the operational codes of Tony Blair and Bill Clinton, Mark Schafer and Stephen G. Walker; Foreign policy and the rational public in comparative perspective, Pierangelo Isernia, ZoltÃ¡n JuhÃ¡sz and Hans Rattinger; Gender differences in public attitudes toward the use of force by the United States, 1990-2003, Richard C. Eichenberg; Further tests of the women and peace hypothesis: evidence from cross-national survey research in the Middle East, Mark Tessler, Jodi Nachtwey and Audra Grant. Part IV How International Organizations Can Affect the Security of States and Peoples: Why states act through formal international organ

Bruce Russett is Dean Acheson Professor of International Relations at Yale University and Editor of the Journal of Conflict Resolution.