This book provides a straightforward manual and review handbook for accessing and using the resources of the Internet in the day to day labours of the working scientist. It addresses the problem of how to cope with an army who have discovered a whole new toy shop full of goodies.

Kevin O'Donnell was born in Bathgate, Scotland. He graduated from the University of Aberdeen in 1984 with a microbiology degree and went on to complete a PhD at University College of North Wales in Bangor on hydrocarbon-degrading plasmids in Pseudomonas. Writing up his PhD thesis provided his first real encounter with a computer - an Amstrad PCW word-processor. Having completed his thesis, and convinced that he had exhausted all of the possibilities offered by computers, he sold his PCW. A few years later he discovered Microsoft windows and found that computers were actually fun to use and could do all sorts of useful things which made life easier. Then he gained access to the Internet and found that it was full of resources of interest to scientists but that it took a long time to find them all. Kevin O'Donnell is head of the Diagnostics and Molecular Biology section at the Scottish Agricultural Science Agency, Edinburgh. He is a member of the Society for General Microbiology, International Society for Plant Molecular Biology and British Society for Plant Pathology. He is the author of 'Molecular Diagnostics Resources on the Internet' in Molecular Biology-based Methods in Clinical Diagnosis, U. Reischl ed., Humana (in press). Born near Niagara Falls, in Canada's southern Ontario, Larry Winger had a traditional rural upbringing in what could be called The Great Mid-West. Primary education in tiny, single-room red-brick schoolhouses turned into expansive secondary education in prosperous suburban Pennsylvania. Success in science projects turned into summer employment in a research lab in California, developing the earnest young scientist successively into laboratory technician, graduate student, and post-doctoral researcher. Larry learned BASIC and FORTRAN by remote teletype in 1970, spent the summer of 1971 programming statistical tests by punch card on an unappreciative mainframe, and purchased his first Apple computer (the 2 plus) in 1981, when he was a poor, struggling immunologist living in a garret in London. Although he supplemented his meager living allowance by annoying computer programmers with incredibly bad saxophone busking off Tottenham Court Road, it was not until he seduced Carrie in the dim glow of the B&W monitor that he began to realise the full potential of the personal computer. Following the short-term project trail back to Alberta's frozen wastes, the itinerant Wingers produced a daughter under the Northern lights, introduced the lab to the first IBM PC, and then abandoned it to return to England's home counties to care for ailing parents. Here their shared projects focussed on malaria, and though the biological data was exciting, the Wingers were without any computer to share it with, having been forced to sell the 2 plus to a family of lost souls in Edmonton. A short spell in 1987 as a scientist with a biotechnology company in Geneva introduced Larry to electronic mail, as well as the horrors of weekly commuting across Europe to share in the birth of a son. Return to London meant commuting into a lab filled with Apple devotees, but confirmed a deep suspicion that computer processing is only as good as the data that goes in. It was only when the Morris Minor broke down on the way to the library, that Larry realised how convenient it was to search for citations by computer. Desperate to pay the mortgage between contracts, abstracting pharmacology papers with a bust accountancy firm's ancient computer filled a financial void in the Wingers' life. Sadly, however, it was not until three research projects later, now 1994 in clinical chemistry, that with a major purchase of a new PowerMac and full ethernet and modem connections, the Winger family became virtual. Remote and poverty-stricken now in their electronic cottage in the bleak North Pennines, they are very happy. 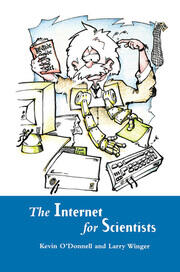