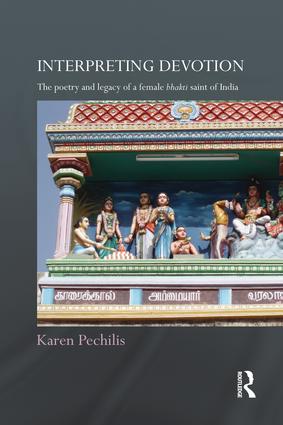 The Poetry and Legacy of a Female Bhakti Saint of India, 1st Edition

Devotion is a category of expression in many of the world’s religious traditions. This book looks at issues involved in academically interpreting religious devotion, as well as exploring the interpretations of religious devotion made by a sixth century poet, a twelfth century biographer, and present-day festival publics.

The book focuses on the female poet-saint Kāraikkāl Ammaiyār, whose poetry is devotional in nature. It discusses the biography written on the poet six centuries after her lifetime, and suggests ways of interpreting Kāraikkāl Ammaiyār’s poetry without using the categories and events promoted by her biographer, in order to engage her own thoughts as they are communicated through the poetry attributed to her. In the same way that the biographer made the poet ‘speak’ to his present day, the book looks at how festivals held today make both the poetry and the biography relevant to the present day.

By discussing how poetry, story and festival provide distinctive yet overlapping interpretations of the saint, this book reveals the selections and priorities of interpreters in the making of a living tradition. It is an accessible contribution to students and scholars of religion, Indian history and women’s studies.

"An excellent piece of scholarship from someone who could well have been a poet." - Bharati Jagannathan, University of Delhi; Himal Southasian, July 2012.

"Given its theoretical investment and topical location, this book will appeal to scholars of bhakti traditions, Indian religions, and comparative studies of devotion across religious traditions." – Varuni Bhatia, University of Michigan, Religious Studies Review 2013

Karen Pechilis is Professor of Religious Studies and NEH Distinguished Professor of Humanities at Drew University, USA. She is an experienced theorist of devotion and translator of Tamil Śiva-bhakti hymns and their scholarly interpretation. Her previous books are The Embodiment of Bhakti (1999) and The Graceful Guru: Hindu Female Gurus in India and the United States (2004).