Interrogation in War and Conflict
A Comparative and Interdisciplinary Analysis 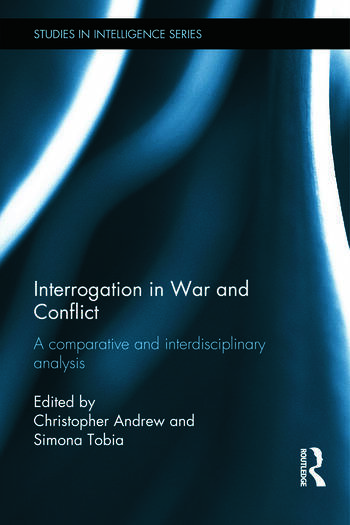 Interrogation in War and Conflict: A Comparative and Interdisciplinary Analysis

This edited volume offers a comparative and interdisciplinary analysis of interrogation and questioning in war and conflict in the twentieth century.

Despite the current public interest and its military importance, interrogation and questioning in conflict is still a largely under-researched theme. This volume’s methodological thrust is to select historical case studies ranging in time from the Great War to the conflicts in former Yugoslavia, and including the Second World War, decolonization, the Cold War, the ‘Troubles’ in Northern Ireland and international justice cases in The Hague, each of which raises interdisciplinary issues about the role of interrogation. These case-studies were selected because they resurface previously unexplored sources on the topic, or revisit known cases which allow us to analyse the role of interrogation and questioning in intelligence, security and military operations.

This book will be of much interest to students of intelligence studies, strategic studies, counter-terrorism, international justice, history and IR in general.

Preface, Christopher Andrew and Simona Tobia  Introduction: The Modern History of Interrogation, Christopher Andrew  1. A Process of Modernization? Prisoner of War Interrogation and Human Intelligence Gathering in the First World War, Heather Jones  2. Stalin, The NKVD and the Investigation of the Kremlin case: Prelude to the Great Terror, Svetlana Lokhova  3. World War Two Interrogations and British Foreign Intelligence: the Case of ELGAR, Christian Bjoern Bak  4. Gestapo Interrogations: Myths and Realities, J. Ryan Stackhouse  5. ‘Instructive for the Future’: The Interrogation of the Major War Criminals in Germany, 1945, Richard Overy  6. Crushing Czechoslovak Identity: Stalinist Violence and the Resistance of Czechoslovak Ex-Political Prisoners from the Communist Era, Kristýna Bušková and Nigel Hunt  7. Interrogation and ‘Psychological Intelligence’: the Construction of Propaganda during the Malayan Emergency, 1948-1958, Thomas J. Maguire  8.  The British Army, Violence, Interrogation and Shortcomings in Intelligence Gathering during the Cyprus Emergency 1955-59, Charlie Standley  9. The French Military in its Last Colonial War. Algeria, 1954-1962: the Reign of Torture, Raphaëlle Branche  10. War and Interrogation: The Rhodesian Bush war, Sue Onslow  11. Interrogation during ‘the Troubles’ in Northern Ireland, 1971-75, Samantha Newbery  12. A Perceived Neutrality: an Englishwoman’s Reflections on Working as an Interpreter for Suspect and Witness Interviews at the International War Crimes Tribunal for the Former Yugoslavia, Louise Askew  13. Coercive Interrogation and the International Criminal Tribunals, Matt Pollard  Conclusions: Interrogation, Interviewing and Questioning in the Twentieth Century, Simona Tobia

Christopher Andrew is Professor of Modern and Contemporary History at the University of Cambridge and a former visiting Professor of National Strategy at Harvard University. His recent books include The Defence of the Realm: The Authorised History of MI5 (2009), The Sword and Shield: The Mitrokhin Archive and the Secret History of the KGB (1999) and The Mitrokhin Archive II: The KGB and the World (2005). He is a founding editor of Intelligence and National Security.

Simona Tobia is a lecturer in the School of Literature and Languages at the University of Reading. She is co-author, with Hilary Footitt, of War Talk: The Role of Foreign Languages in World War II (2012).