Intersexualization
The Clinic and the Colony 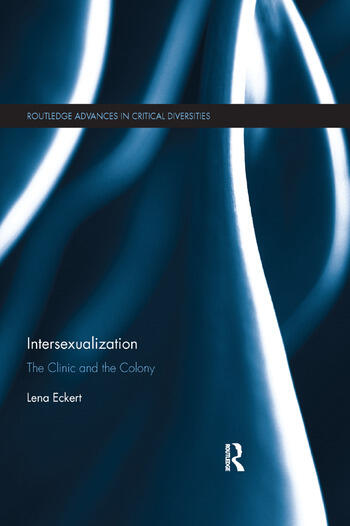 Intersexualization: The Clinic and the Colony

Since the 1970s, research into ‘Intersex’ has been a central fascination for feminist theorists seeking to make arguments about how men and women are created as social/gender categories. Intersexualization: The Clinic and the Colony takes the case of Olympic runner Caster Semenya as a starting point to explore the issue of determining sex, and the ways in which intersexuality is a ‘threat’ to the distinction between men/women, homosexuality/heterosexuality and white/black.

Enclosing a wide range of inter- and transdisciplinary approaches to heteronormative and dichotomously organized frames of knowledge and organization, this volume is essential reading for upper-undergraduate and post-graduate students within the fields of gender studies, social studies of medicine, anthropology,science and technology studies, cultural studies, sociology, and history of medicine.

Introduction: “I am who I am and I’m proud of myself”  Section 1: The Clinic  Chapter 1. Pathologization and Surgery  Chapter 2. Gender Identity Limited  Chapter 3. From Five Sexes to n-sexes  Section 2: The Colony  Chapter 4. Seeing, hearing, translating  Chapter 5. Saving masculinity in cross-cultural intersexualization  Excursus: Bound to The Third?  Chapter 6. The fifth other  Conclusion  Index
</toc>

Lena Eckert is Assistant Professor in the Media Faculty at Bauhaus-University Weimar, Germany.

In Intersexualization, Lena Eckert persuasively focuses our attention on the epistemic logic and discursive practices that have worked to define the "heterorelational sex-gender-sexuality system" and to deal with those whose bodies and identities fall outside of its norms. Deftly combining analysis of practices in the psycho-medical sciences (which she names The Clinic) with those of cross-cultural anthropology (or The Colony, as she calls it), and drawing on an impressive range of case studies, Eckert opens up space for a multiplicity of narratives, identities, and embodiments. As she writes, "sex is always complex," and this book illuminates what is at stake in how that complexity comes to matter for bodies rendered troubling and troublesome.
Ruth Holliday, Professor of Gender and Culture, Director of Research, School of Sociology and Social Policy, University of Leeds, UK

Lena Eckert’s book focuses on the cross-cultural construction of processes of intersexualization, exploring and combining knowledge production in medicine, psychology, sexology, anthropology and gender studies. Moreover, Intersexualization delves into the colonial archive to make sense of current practices which have far-reaching implications for the lives of people. A book that deserves a broad audience.
Gloria Wekker, Professor Doctor, Emeritus, Department of Gender Studies, Faculty of the Humanities, Utrecht University, The Netherlands

I cannot recommend this book highly enough for its scholarship and its importance to contemporary intersex rights activism around the globe. More than merely taking cues from Foucault, Eckert develops a genealogy of both clinical practice and colonialist domination of bodies cast—as she shows the intersexualized to be—as degenerate, and in need of containing, disciplining, and controlling in the service of creating the powerful careers of the famous psychologists, psychoanalysts, physiologists, and sexologists who had everything to gain from the biomedicalization of intersex in the twentieth century. The book furthers critical intersex studies to more effectively challenge the racist, classist, and heterosexist legacies of twentieth-century practices and the long shadow they cast over contemporary concerns with the sites wherever embodiment, human rights, and sexualities meet.
Morgan Holmes, Professor, Wilfrid Laurier University, Canada