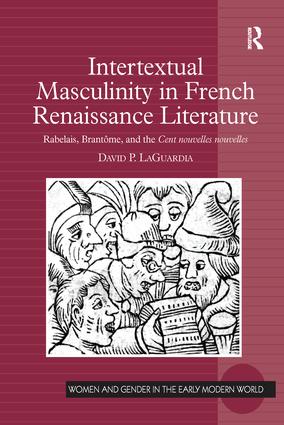 Intertextual Masculinity in French Renaissance Literature is an in-depth analysis of normative masculinity in a specific corpus from pre-modern Europe: narrative literature devoted to the subject of adultery and cuckoldry. The text begins with a set of general questions that serve as a conceptual framework for the literary analyses that follow: why were early modern readers so fascinated by the figure of the cuckold? What was his relation to the real world of sexual behavior and gender relations? What effect did he have on the construction of actual masculinities? To respond to these questions, David LaGuardia develops a theoretical approach that is based both on modern critical theory and on close readings of records and documents from the period. Reading early modern legal texts, penance manuals, criminal registers, and exempla collections in relation to the Cent nouvelles nouvelles, Rabelais's Tiers Livre, and BrantÃ´me's Dames galantes, LaGuardia formulates a definition of masculinity in this historical context as a set of intertextual practices that men used to relay and to reinforce their gender identities. By examining legal and literary artifacts from this particular period and culture, this study highlights the extent to which this supposedly normative masculinity was historically contingent and materially conditioned by generic practices.

'David La Guardia's study of masculinity in medieval and early modern French texts argues that masculinity is an intertextual practice, that men write and read for other men, passing on exemplary stories that constitute a kind of "guidebook" for normative masculinity. Examining Rabelais, the Cent nouvelles, and BrantÃ´me, among others, La Guardia draws on extensive erudition to make an argument whose implications go beyond the scope of the study itself. Intertextual Masculinity makes substantial and original contributions to the understanding of normative masculine gender in early modernity and beautifully illustrates the degree to which gendering is a rhetorical practice of intertextuality, then as now.' Carla Freccero, University of California, Santa Cruz, USA ’Intertextual Masculinities is a bold and convincing reassessment of these consistently fascinating texts in the light of modern gender and queer theory and classical and medieval models. LaGuardia’s background in late medieval studies provides a rich and erudite map that anchors sixteenth-century literary practice in its vernacular past - a particularly rewarding endeavour that reasserts the connections between medieval and early modern that are often ignored or broken… a provocative and challenging book that raises very pertinent and insistent questions about the study of gender, both then and now.’ French Studies