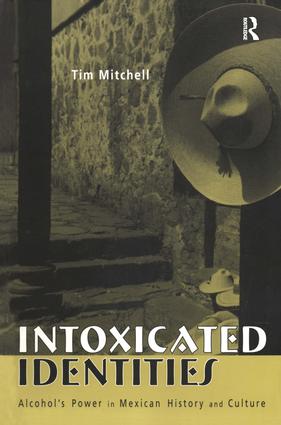 First Published in 2004. Routledge is an imprint of Taylor & Francis, an informa company.

"Intoxicated Identities is a fascinating work that will change the way you think and feel about drunks and drunkenness and hence about the world itself. In an age scared of drugs and addictions, Mitchell pursues bold ideas with nuanced arguments and writing that is witty, racy and unusually sparkling. This is an intoxicating book.

"Both dazzling and scholarly, profound and witty, Mitchell's meticulously researched book on Mexican drinking habits is destined for classic status in alcohol-and-cultures studies. Set against vast panoramas of time and space from Aztec to Zapotec, Mitchell's work shows that sobriety and drunkenness are not stark alternatives, but interwoven threads within the rich tapestry of Mexican identity. Intoxicated Identities ignites the imagination with the brilliance and power of sustained lighting: ¡magnífico!

"As in his writings on Spanish culture Mitchell has set Mexican 'binge drinking' into a broad historical and social context and revealed its ancient roots as well as later psychic and economic functions. I highly recommend this book to people interested in Mexican history, anthropology, psychology, music and literature: it is a scholarly tour-de-force.