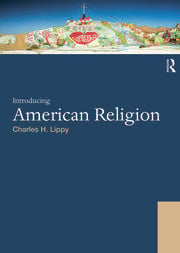 Introducing American Religion provides a lively and concise overview of the historical development of religion in the USA. In four parts, Charles Lippy traces the history of American religion from Europe, Native American and African life, through to the age of independence, and on to the late twentieth century up to the present day.

The narrative lays particular stress on the development of diversity and pluralism in American religious life. It explores the African American experience through slavery, Roman Catholic and Jewish immigration, political and economic factors, the impact of Latino culture, and the growth of Hinduism and Buddhism, as well as the concept of American civil religion. Introducing American Religion is ideal reading for students wishing to develop a broad understanding of American religious history. Illustrated throughout and featuring quotations from original sources, it includes text boxes, summary charts, study questions, a glossary and lists of further reading and weblinks to aid students with revision.

The accompanying website for this book can be found at www/routledge.com/textbooks/9780415448598. Features of the website include a hyperlinked and annotated primary source bibliography (of primary sources named in the book and accompanying page numbers), a list of online audiovisual resources, test questions, a study skills section, PowerPoints on key chapters, additional images, tables and charts of statistics on American religion, links to online libraries and archives, a regularly updated blog.

Charles Lippy holds the LeRoy A. Martin Distinguished Professorship of Religious Studies at the University of Tennessee, Chattanooga.  His previous publications include: Modern American Popular Religion; Being Religious, American Style; and The Evangelicals: A History, Themes, and Biographies.

'From colonization to post-modernity, Lippy provides an eminently reliable and readable guide to the vibrant diversity of religion in America.  Well-chosen images and key documents bring readers even further into the story.' - David R. Bains, Samford University, USA