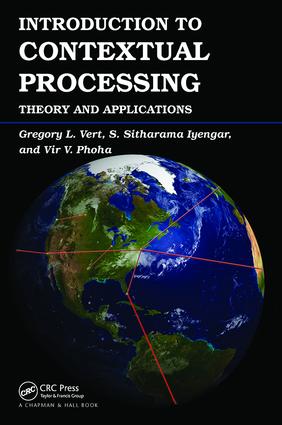 Develops a Comprehensive, Global Model for Contextually Based Processing Systems

Helping to advance a valuable paradigm shift in the next generation and processing of knowledge, Introduction to Contextual Processing: Theory and Applications provides a comprehensive model for constructing a contextually based processing system. It explores the components of this system, the interactions of the components, key mathematical foundations behind the model, and new concepts necessary for operating the system.

After defining the key dimensions of a model for contextual processing, the book discusses how data is used to develop a semantic model for contexts as well as language-driven context-specific processing actions. It then applies rigorous mathematical methods to contexts, examines basic sensor data fusion theory and applies it to the contextual fusion of information, and describes the means to distribute contextual information. The authors also illustrate a new type of data repository model to manage contextual data, before concluding with the requirements of contextual security in a global environment.

This seminal work presents an integrated framework for the design and operation of the next generation of IT processing. It guides the way for developing advanced IT systems and offers new models and concepts that can support advanced semantic web and cloud computing capabilities at a global scale.

The Case for Contextually Driven Computation

Components of Traditional IT Architectures

Example of Traditional IT Architectures and Their Limitations

Contextual Processing and the Semantic Web

The Case for Contextual Processing and Summary

Defining the Transformation of Data to Contextual Knowledge

Introduction and Knowledge Derivation from the Snow of Data

The Importance of Knowledge in Manmade Disasters

Context Models and Their Application

The Properties of Contextual Data

Other Types of Reasoning in Contexts

A Calculus for Reasoning about Contextual Information

Research Directions for Fusion and Data Mining in Contextual Processing

Introduction to Data Dissemination and Discovery

Extended Data Model for the Storage of Context Data Sets

Challenges and Issues in Development of Contextual Security

References appear at the end of each chapter.

Gregory L. Vert is an assistant professor of computer science at Texas A&M University–Central Texas in Killeen. Dr. Vert has worked in industry for companies that include IBM, American Express, and Boeing. While at American Express, he co-designed a portion of their worldwide database system. His current research deals with advanced methods for intrusion detection and autonomous system response, advanced data management models, biometrics and bioinformatics, and contextual processing.

Sundaraja Sitharama Iyengar is the Roy Paul Daniels Distinguished Professor and chairman of the Department of Computer Science as well as founder and director of the Robotics Research Laboratory at Louisiana State University in Baton Rouge. Dr. Iyengar is the founding editor-in-chief of the International Journal of Distributed Sensor Networks, has been an associate editor of IEEE Transaction on Computers and IEEE Transactions on Data and Knowledge Engineering, and has been a guest editor of IEEE Computer Magazine. He is a member of the European Academy of Sciences and a fellow of the IEEE, ACM, AAAS, and SDPS. He has received the Distinguished Alumnus Award of the Indian Institute of Science and the IEEE Computer Society’s Technical Achievement Award.

Vir V. Phoha is a professor of computer science, W.W. Chew Endowed Professor, and director of the Center for Secure Cyberspace at Louisiana Tech University in Ruston. An ACM Distinguished Scientist, Dr. Phoha has received funding from the NSF, Army Research Office, Office of Naval Research, Air Force Office of Scientific Research, Air Force Research Lab, and the State of Louisiana to support his research.

Drs. Vert, Iyengar, and Phoha are all members of the Center for Secure Cyberspace located at Louisiana Tech University.