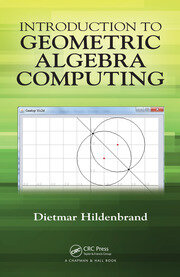 "Dietmar Hildenbrand's new book, Introduction to Geometric Algebra Computing, in my view, fills an important gap in Clifford's geometric algebra literature…I can only congratulate the author for the daring simplicity of his novel educational approach taken in this book, consequently combined with hands on computer based exploration. Without noticing, the active reader will thus educate himself in elementary geometric algebra algorithm development, geometrically intuitive, highly comprehensible, and fully optimized."

Geometric Algebra is a very powerful mathematical system for an easy and intuitive treatment of geometry, but the community working with it is still very small. The main goal of this book is to close this gap with an introduction to Geometric Algebra from an engineering/computing perspective.

power for geometric modeling. From the geometric objects point of view, it focuses on the most basic ones, namely points, lines and circles. This algebra is called Compass Ruler Algebra, since it is comparable to working with a compass and ruler. The book explores how to compute with these geometric objects, and their geometric operations and transformations, in a very intuitive way.

The book follows a top-down approach, and while it focuses on 2D, it is also easily expandable to 3D computations. Algebra in engineering applications such as computer graphics, computer vision and robotics are also covered.

Dietmar Hildenbrand is a lecturer in Geometric Algebra at TU Darmstadt.