Introduction to Thermodynamics of Mechanical Fatigue 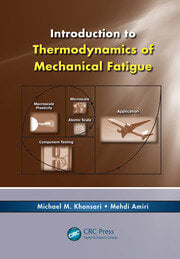 Introduction to Thermodynamics of Mechanical Fatigue

Fatigue is probabilistic in nature and involves a complex spectrum of loading history with variable amplitudes and frequencies. Yet most available fatigue failure prediction methods are empirical and concentrate on very specific types of loading. Taking a different approach, Introduction to Thermodynamics of Mechanical Fatigue examines the treatment of fatigue via the principles of thermodynamics. It starts from the premise that fatigue is a dissipative process and must obey the laws of thermodynamics. In general, it can be hypothesized that mechanical degradation is a consequence of irreversible thermodynamic processes. This suggests that entropy generation offers a natural measure of degradation.

An Entropic Approach to Fatigue and Degradation

Drawing on recent cutting-edge research and development, the authors present a unified entropic approach to problems involving fatigue. They introduce the fundamentals of fatigue processes and explore a wide range of practical engineering applications.

The book reviews commonly observed failure modes, discusses how to analyze fatigue problems, and examines the deformation characteristics of a solid material subjected to fatigue loading. It also looks at how to use thermodynamics to determine the onset of fatigue failure. In addition, the book presents methodologies for improving fatigue life and for accelerated fatigue testing.

Learn How to Apply the Entropic Approach to Fatigue Problems

Comprehensive and well organized, this work helps readers apply powerful thermodynamics concepts to effectively treat fatigue problems at the design stage. It offers an accessible introduction to a new and exciting area of research in the field of fatigue failure analysis.

Michael Khonsari is the holder of the Dow Chemical Endowed Chair and Professor of the Mechanical Engineering Department at Louisiana State University where he directs the Center for Rotating Machinery (CeRoM). Professor Khonsari is a fellow of ASME, STLE, and the American Association for the Advancement of Science (AAAS). He holds several patents and he has authored two books and over 240 archival journal articles, book chapters, and special publications. He is currently the chief editor of the ASME Journal of Tribology.

Mehdi Amiri earned his Ph.D. in mechanical engineering from Louisiana State University where he is currently a research associate in the Center for Rotating Machinery (CeRoM). His area of research is in the field of fatigue and fracture analysis. He holds one patent and has authored several journal publications. His research interests include thermal/fluid mechanics, thermodynamics, tribology, and failure analysis.