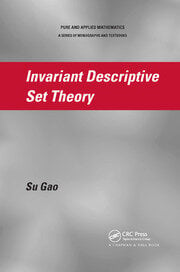 Presents Results from a Very Active Area of Research

Exploring an active area of mathematics that studies the complexity of equivalence relations and classification problems, Invariant Descriptive Set Theory presents an introduction to the basic concepts, methods, and results of this theory. It brings together techniques from various areas of mathematics, such as algebra, topology, and logic, which have diverse applications to other fields.

After reviewing classical and effective descriptive set theory, the text studies Polish groups and their actions. It then covers Borel reducibility results on Borel, orbit, and general definable equivalence relations. The author also provides proofs for numerous fundamental results, such as the Glimm–Effros dichotomy, the Burgess trichotomy theorem, and the Hjorth turbulence theorem. The next part describes connections with the countable model theory of infinitary logic, along with Scott analysis and the isomorphism relation on natural classes of countable models, such as graphs, trees, and groups. The book concludes with applications to classification problems and many benchmark equivalence relations.

By illustrating the relevance of invariant descriptive set theory to other fields of mathematics, this self-contained book encourages readers to further explore this very active area of research.