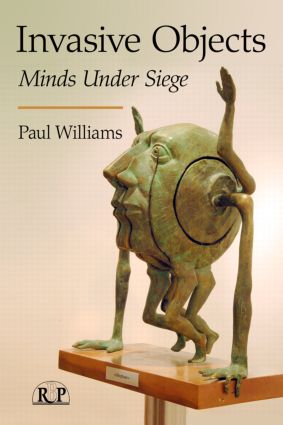 The "Director" controls Ms. B’s life. He flatters her, beguiles her, derides her. His instructions pervade each aspect of her life, including her analytic sessions, during which he suggests promiscuous and dangerous things for Ms. B to say and do, when he suspects that her isolated state is being changed by the therapy. The "Director" is a diabolical foreign body installed in the mind who purports to protect but who keeps Ms. B feeling profoundly ill and alone.

The story of Ms. B’s analysis is one of many vivid illustrations presented in this collection of papers by Paul Williams, who shares his lifetime of experience working with severely disturbed patients. As the title suggests, the unifying thread of these papers is the investigation of serious mental disturbance, often characterized by the presence of intrusive and invasive thoughts and fantasies that originate in a traumatic past but which can colonize and destroy the rational mind. The diverse papers are grouped into two related sections. Part one is comprised of papers with a clinical orientation, including a summary of the analysis of Ms. B as well as a speculative paper on the psychosis and recovery of John Nash. In part two, applied psychoanalytic thinking is integrated with Williams’ other professional passion, anthropology, in a paper that exemplifies generative thought through art, poetry, and tribal masks. Other papers in this section include a short essay that takes Freud-bashers to task, a reappraisal of the Rat Man, and a lively discussion of André Green’s "central phobic position" in borderline thinking.

Whether engaging in the coconstructed therapeutic relationship or the implications for "madness in society" at large, Williams’ diverse influences – psychoanalytic and otherwise – repeatedly come to the fore in an intellectually stimulating and clinically enriching way. It goes without saying that work with patients whose thinking is psychotic is a challenge, as these papers clearly demonstrate, but Williams reminds us that it is a challenge that psychoanalysis can not only engage but also treat with enduring and impressive therapeutic results.

"Paul Williams, in this beautifully written set of essays, manages to achieve something extraordinary: He succeeds in conveying the essential core of the psychoanalytic treatment of severe emotional disturbances. He shows the reader how he goes about the difficult task of locating psychologically the embers of the almost extinguished humanity of the patient, and of finding a way to enter into conversation with the patient on subjects that include the desolation resulting from the patient's severed human connection with himself and others. No one writing today brings to life as well as Williams the process of forging a genuine human connection with psychotic patients (and the psychotic aspect of healthier patients), and in doing so, helping to restore the patient's connection with his own humanity - a connection that is the foundation of sanity." - Thomas H. Ogden, M.D., author, Rediscovering Psychoanalysis (Routledge, 2008)

"In this remarkable book, Paul Williams assembles a wide-ranging array of essays that derive from his experience as a psychoanalyst, anthropologist, and writer. He has long experience in helping psychiatrists to understand the severely psychotic patient, and as such his clinical skill simply leaps off the page. The breadth and depth of Williams' writing will ensure a wide readership of this unusual and important work." - Murray Jackson, M.D., Emeritus Consultant Psychiatrist/Psychoanalyst, Maudsley Hospital and Institute of Psychiatry, London

"Drawing on his background as an anthropologist and his training as a psychoanalyst, Paul Williams describes how the search for meaning in human experience is the central quest of his work with his patients. The suffering individual, especially those suffering crippling psychotic anxieties, are at the core of his preoccupations, and his endeavor is to reach and treat them. This requires a continuous search for self-knowledge and a capacity to engage deeply in human relationships. In the compelling accounts of his clinical examples, one can see Williams at work, facilitating the transformation of his patients' disturbances into ordinary humanity. The book also develops his thoughts on potential space and the use of the analyst as a third in the process of enabling symbolization of the object. This is a profound and deeply moving book that I highly recommend." - Rosine Perelberg, Ph.D., author, Time, Space, and Phantasy (Routledge, 2009)

"Paul Williams' new book is an inspirational tour de force into the subtleties and complexities of human nature. The links and connections that Williams makes between the symbolic and the nonsymbolic, the psychotic and the ordinary, and the individual and the collective are his main contributions. Clinicians and social researchers alike, who are seriously interested in grasping and comprehending the humanity of people and the elusiveness of psychopathology, will find the book a must to investigate and a pleasure to read." - Leon Kleimberg, B.A., Training Analyst, British Psychoanalytical Society

"Not since Herbert Rosenfeld's pioneering application of psychoanalytic understanding to regressed psychotic states 50 years ago has such a comprehensive and convincing effort as Invasive Objects been made, applying present-day object relations theory to the apparently chaotic, confusing, and devastating regressive transferences of schizophrenic patients. Williams illustrates in great detail his psychoanalytic work with borderline and psychotic patients, and the open, candid communication of the painful, unavoidably complex countertransference developments that this work entails provides additional depth to the clinical chapters. The second part of the book further enriches the clinical contributions with a broad theoretical frame, and a call for action to improve the treatment within institutional settings of the most severly ill psychiatric patients. This book is warmly recommended to all professionals dedicated to the psychotherapeutic care of severe personality disorders and the psychotic spectrum of psychiatric illness." - Otto F. Kernberg, M.D., University Hospital of Columbia and Cornell

"A profound humanity comes through in Williams’s work and is characteristic of his relationship with his patients." - The Journal of Analytical Psychology

"…each chapter can be enjoyed in its own right…There were a number of chapters that I found myself particularly enthralled by… I anticipate that readers will find much in this book that will leave them enriched and that it will have made them reflect on their own ideas and practice and be useful in their daily work." - Brian Martindale, Psychoanalytic Psychotherapy

Gabbard, Foreword. Part I: Clinical Papers. Incorporation of an Invasive Object. Some Difficulties in the Analysis of a Withdrawn Patient. Psychotic Developments in a Sexually Abused Borderline Patient. Making Time, Killing Time. The Psychoanalytic Therapy of "Cluster A" Personality Disorders: Paranoid, Schizoid, and Schizotypal. The Beautiful Mind of John Nash: Notes Toward a Psychoanalytic Reading. Part II: Applied Papers.Madness in Society. The Worm that Flies in the Night. "The Central Phobic Position": Notes on Andre Green's "New Formulation of the Free Association Method" and the Analysis of Borderline States. Freud-baiting. Notes on "Notes Upon a Case of Obsessional Neurosis" (Freud, 1909). Unimaginable Storms: Introduction and Conclusion.

Paul Williams, Ph.D., is a training and supervising analyst with the British Psychoanalytical Society and a consultant psychotherapist in the British National Health Service, as well as a member of the Royal Anthropological Institute. From 2001-2007 he was joint Editor-in-Chief, with Glen Gabbard, of the International Journal of Psychoanalysis. He has written widely on the subjects of personality disorders and psychosis, and co-authored, with Murray Jackson, Unimaginable Storms: A Search for Meaning in Psychosis (Karnac, 1994).