Invisible Stars
A Social History of Women in American Broadcasting 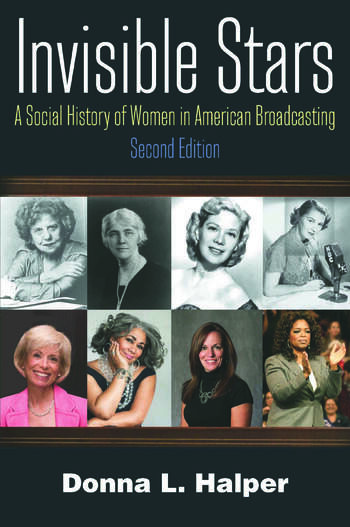 Invisible Stars: A Social History of Women in American Broadcasting

was the first book to recognize that women have always played an important part in American electronic media. The emphasis is on social history, as the author skillfully explains how the changing role of women in different eras influenced their participation in broadcasting. This is not just the story of radio stars or broadcast journalists, but a social history of women both on and off the air. Beginning in the early 1920s with the emergence of radio, the book chronicles the ambivalence toward women in broadcasting during the 1930s and 1940s, the gradual change in status of women in the 1950s and 1960s, the increased presence of women in broadcasting in the 1970s, and the successes of women in broadcasting in the 1980s and 1990s. The second edition is expanded to include the social and political changes that occurred in the 2000s, such as the growing number of women talk show hosts; changing attitudes about women in leadership roles in business; more about minority women in media; and women in sports and women sports announcers. The author addresses the question of whether women are in fact no longer invisible in electronic media. She provides an assessment of where progress for women (in society as well as broadcasting) can be seen, and where progress appears totally stalled.

“The detail of the book is remarkable, as are the lives of numerous women who helped shape American broadcasting. There is a rich hidden cultural and social history here, and Halper tells it eloquently. This book is a must read for anyone interested in the status of women in broadcasting today and in the 20th century as a whole. Summing up: Highly recommended.” -G. A. Foster, University of Nebraska—Lincoln in CHOICE

"The second edition of Donna Halper's Invisible Stars expands upon her first book by showing how women have become media tastemakers and moguls in multi-media environments. With the eye of a historian/cultural critic, Halper updates the overlooked history of women as unique contributors to our media environment." -- Jarice Hanson, University of Massachusetts-Amherst

"As usual, Donna Halper has done an excellent job with her subject. Her work is always comprehensive and readable, and I think in Invisible Stars she is at her best. Her narrative is rich and fluid. She is a stickler for accuracy, and her research is always fresh and revealing. Students really love this book, and I use it in my course. In sum, she remains on target with her renewed version of a groundbreaking text. Actually, the book is stronger now, which is as it should be since it is the singular work on its subject." -- Michael C. Keith, Boston College

"Long-time radio consultant turned academic, Halper is an astute observer of her field. This new edition of her path-breaking study of women in radio-television offers the same brightly written approach surveying the ups and downs of women in the electronic media, illustrated with telling examples and anecdotes of their successes and failures over nearly a century. A new chapter covers the past dozen years, and places those media within their changing social and political context. While even-handed in her commentary, Halper makes clear that despite continuing progress--more women in a broader number of job categories--females still lag far behind their male counterparts, especially in senior management. Perhaps if more of the latter read this insightful book, the pace of change might speed up." -- Christopher H. Sterling, George Washington University

"Donna Halper is in the forefront of recovering an extraordinarily valuable history for anyone interested in the mass media--and who isn't? Halper makes the invisible (female) stars visible by taking you behind the curtain to reveal not just the unsung on-air personalities, but also the women who served as engineers, music directors, even station owners. Moreover, she contextualizes her subject in the social mores and political imperatives of each historical period. By the time Halper finishes, the reader is hard pressed to think of a reason why the names of path breaking women like Eunice Randall, Marie Zimmerman, Dorothy Thompson, and Mary Margaret McBride should not occupy a place in history comparable to that of their male counterparts--a place long overdue." -- Reebee Garofalo, University of Massachusetts, Boston (on the previous edition)

"This book should be required in every broadcast history class." -- Journalism History (on the previous edition)

"In Invisible Stars, Halper attempts to right a historical wrong: the marginalization of women in broadcasting histories. Her clear and often conversational writing style makes Invisible Stars a readable overview of women's contributions to American broadcasting." -- Technology and Culture (on the previous edition)

"This sweeping work pulls together disparate elements in radio and television history, illuminating the development of those pervasive media as it recounts the history of women's involvement. ... Invisible Stars is a vital complement to our understanding of the multidimensional roles women have always played in broadcasting." -- The Journal of American History (on the previous edition)

"[Halper's] clear and often conversational writing style makes Invisible Stars a readable overview of women's contribution to American broadcasting. Useful to undergraduates or readers new to the field, this book surveys industrial events that have influenced the fate of women in the industry, social trends, the experiences of working women in broadcasting, the representations of women in radio and television programming, and the social impact of these representations from the 1920s to the present."" -- Technology and Culture (on the previous edition)

"Halper writes well and with feeling and tells a host of fascinating stories about female pioneers in radio. ... Halper tells the story of women in broadcasting as a part of the larger social history of the times, making her book that much more valuable. This is important reading on a topic long overlooked." -- Communication Booknotes Quarterly (on the previous edition)