Ionosphere and Applied Aspects of Radio Communication and Radar 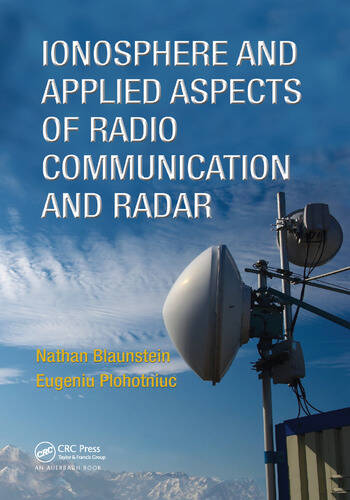 Ionosphere and Applied Aspects of Radio Communication and Radar

A Complete Reference for the 21st Century

Until recently, much of the communications technology in the former Eastern bloc countries was largely unknown. Due to the historically competitive nature of East/West relations, scientific groups operated independently, without the benefit of open communication on theoretical frameworks and experimental technologies. As these countries have begun to bridge the gap and work in a more cooperative environment, the need has grown for a comprehensive guide which assimilates all the information in this vast knowledge bank.

Ionosphere and Applied Aspects of Radio Communication and Radar meets the demand for an updated reference on this continually evolving global technology. This book examines the changes that have occurred in the past two or three decades. It thoroughly reviews ionospheric radio propagation, over-horizon and above-horizon radars, and miniature ionospheric stations used for investigating nonregular phenomena occurring in the ionosphere. In addition, it also comprehensively discusses land-satellite and satellite-satellite communications.

This volume also reviews an area that has been all but ignored in previous works: the effects of plasma irregularities on radio waves propagation through the inhomogeneous ionosphere. Here, a heavy focus is placed on the effects of these irregular phenomena. And due to the recent wireless revolution, more attention than ever has been aimed on improving the efficiency of land-satellite and satellite-satellite communication networks, which are fully addressed.

Written by two leading scientists, this book will be an invaluable guide to anyone working in this ever-changing field.

Nathan Blaunstein was born in Moldova, former USSR, in 1948. He received MS degrees in radio physics and electronics from Tomsk University, Tomsk, former Soviet Union, in 1972, and PhD and DS and professor degrees in radio physics and electronics from the Institute of Geomagnetism, Ionosphere, and Radiowave Propagation (IZMIR), Academy of Science USSR, Moscow, Russia, in 1985 and 1991, respectively. From 1979 to 1984, he was an engineer and a lecturer, and then, from 1984 to 1992, a senior scientist, an associate professor, and a professor at Moldavian University, Beltsy, Moldova. From 1993 he was a researcher of the Department of Electrical and Computer Engineering and a visiting professor in the Wireless Cellular Communication Program at the Ben-Gurion University of the Negev, Beer-Sheva, Israel. Since April 2001, he has been an associate professor, and in 2005, a full professor in the Department of Communication Systems Engineering. Dr. Blaunstein has published ten books, two special chapters in handbooks on applied engineering and applied electrodynamics, six manuals, and over 190 articles in radio and optical physics, communication, and geophysics. His research interests include problems of radio and optical wave propagation, diffraction, reflection, and scattering in various media (sub-soil medium, terrestrial environments, troposphere, and ionosphere) for purposes of optical communication and radio and optical location, aircraft, mobile-satellite, and terrestrial wireless communications and networking.