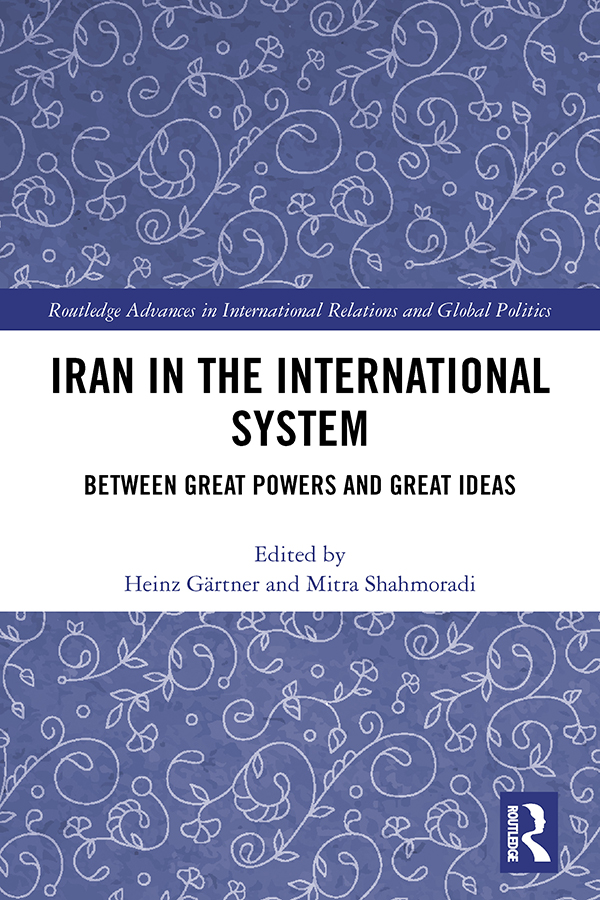 Iran in the International System

Drawing on Iran’s history and its relations with great powers and regional neighbours, this book addresses the question of how much continuity and/or change there is in Iranian international relations since the Iranian revolution.

Iran has often been at the centre of the political debate on both the Gulf region and the transatlantic relations. Following the Trump administration’s withdrawal from the Viennese nuclear agreement in May 2018 signed by the five permanent members of the UN-Security Council, the relationship between Iran and the world entered a new phase. With high expectations within Iran for improved relations with Europe, the this book calls for a new and innovative approach to be undertaken by the Iranian leadership towards the US, Europe and Asia if Iran is to find a role for itself within regional and international structures. Exploring power relations, negotiations, the role of international institutions and international law, the contributors consider the relations among central powers that influence Iran’s internal and external affairs; and examine Iran’s domestic motives and role in the local and regional context.

This book will be of interest to scholars and students of Politics, International Relations, Iranian Politics, Iranian Foreign Policy. It may also provide insights for policymakers, journalists, and the military.

"The risk of conflict between Iran and the United States is real and growing. This timely collection of excellent essays helps explain why. A diverse set of international experts analyze the complex history of U.S.-Iranian relations, the impact of sanctions on the Iranian economy and domestic politics, and the possible fate of the Iran nuclear deal. Most importantly, the authors present creative ideas about how best to reduce these risks." - Scott D. Sagan

2 The Iranian Threat: The Construction of Insecurity

3 The fate of the JCPOA

5 The Impact of Economic Sanctions on the Iranian Middle Class

6 Iran and Europe: The never-ending hope for strong and efficient relations

8 The Iranian Nuclear Issue and China: Sino-Iranian Interactions Within and Beyond the UNSC

9 Iran and the International Order: Historic Transitions and New Challenges

11 Iran before the revolution: some considerations concerning socio-cultural aspects of urban life in the Sixties of the past century

Heinz Gärtner is lecturer at the Department of Political Science at the University of Vienna and at Danube University.

is a freelance artist, painter, poet and art educator in Vienna.