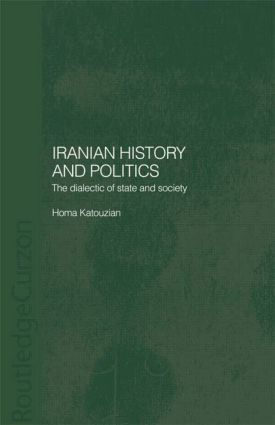 The Dialectic of State and Society, 1st Edition

This book contains the most detailed and comprehensive statement of Homa Katouzian's theory of arbitrary state and society in Iran, and its applications to Iranian history and politics, both modern and traditional. Every chapter is a study of its own specific topics while being firmly a part of the whole argument. The discussions include close comparisons with the history of Europe to demonstrate the diversities of the logic and sociology of Iranian history from their European counterparts. Being the first modern theory of Iranian history, it is highly regarded by Iranian historians and social scientists, especially as it has helped to resolve many of the anomalies resulting from the application of traditional theories.

Preface Introduction Part 1: Arbitrary Rule: A Theory of Iranian History and Politics 1. The Theory of Arbitrary Rule: Status and Implications 2. Towards a General Theory Of Iranian Revolutions 3. Arbitrary Rule: A Comparative Theory of State, Politics and Society in Iran 4. The Aridisolatic Society: A Model of Long-term Social and Economic Development in Iran 5. European Liberalisms and Modern Concepts of Liberty in Iran 6. Problems of Democracy and the Public Sphere in Modern Iran Part 2: Arbitrary Rule: Applications of Iranian History and Politics 7. Problems of Political Development in Iran: Democracy, Dictatorship or Arbitrary Government 8. Liberty and Licence in the Constitutional Revolution of Iran 9. The Campaign Against the Anglo-Iranian Agreement of 1919 10. The Revolt of Shaikh Mohammed Khiyabani 11. Iran's Fiscal History and the Nature of State and Society in Iran 12. The Execution of Amir Hasank the Vazir: Some Lessons for the Hisotrical Sociology of Iran Index

Homa Katouzian is a social scientist and literary critic. He has taught at various universities, including UCLA and the Institute for Advanced Study, Princeton. An Associate Member of the Faculty of Oriental Studies, University of Oxford, his publications include State and Society in Iran (2000), Sadeq Hedayat: The Life and Legend of an Iranian Writer (1991), Musaddiq and the Struggle for Power in Iran (1990), The Political Economy of Modern Iran (1981) and Ideology and Method in Economics (1980).