Ireland and Anglo-Irish Relations since 1800: Critical Essays
Volume I: Union to the Land War 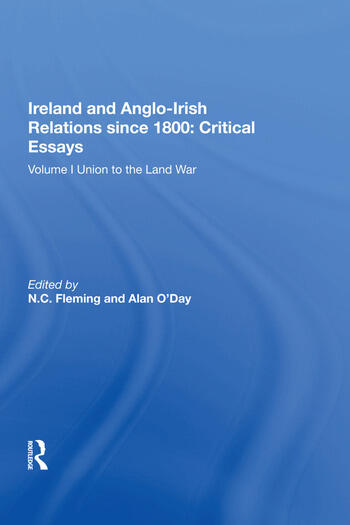 Ireland and Anglo-Irish Relations since 1800: Critical Essays: Volume I: Union to the Land War

The Act of Union, coming into effect on 1 January 1801, portended the integration of Ireland into a unified, if not necessarily uniform, community. This volume treats the complexities, perspectives, methodologies and debates on the themes of the years between 1801 and 1879. Its focus is the making of the Union, the Catholic question, the age of Daniel O'Connell, the famine and its consequences, emigration and settlement in new lands, post-famine politics, religious awakenings, Fenianism, the rise of home rule politics and emergent feminism.

Contents: Introduction, Chronology of Events; Part 1 The Beginnings of the Union: Popular politics in Ireland and the Act of Union, James Kelly; National festivals, the state and 'Protestant ascendancy' in Ireland, 1790-1829, Jacqueline R. Hill; 'How did they pass the Union?' Secret Service expenditure in Ireland, 1799-1804, David Wilkinson. Part II The Catholic Question and Emancipation: Visualizing the liberator: self-fashioning, dramaturgy, and the construction of Daniel O'Connell, Gary Owens; Daniel O'Connell and European Catholic thought, Geraldine Grogan; The Catholic question and the monarchy, 1827-1829, G.I.T. Machin. Part III The Age of O'Connell in the 1830s and 1840s, Repeal: Daniel O'Connell, democrat, liberal Catholic and husband, Maurice R. O'Connell; 'A nation once again': Thomas Osborne Davis and the construction of the Irish 'popular' tradition, Guilio Giorello. Part IV The Great Famine: 'Shovelling out your paupers': the British state and Irish famine migration, 1846-50, Peter Gray; On landlord-assisted emigration from some Irish estates in the 1840s, Desmond Norton. Part V Politics in the 1850s and 60s: 'God save Ireland': Manchester-martyr demonstrations in Dublin, 1867-1916, Owen McGee; The Fenian infiltration of the British army, A.J. Semple. Part VI Isaac Butt and the Rise of Home Rule: Isaac Butt and Irish nationality, Alan O'Day; Cardinal Cullen and Irish nationality, E.D. Steele; The Irish dimension of the British kulturkampf: Vaticanism and civil allegiance, 1870-1875, Hilary Jenkins. Part VII Demography and Social Conditions: The impact of the blight upon the pre-Famine rural economy in Ireland, Patrick McGregor; Harvest fluctuations in pre-Famine Ireland: evidence from Belfast and Waterford newspapers, Peter M. Solar; The decline and fall of Donnybrook Fair: moral reform and social control in 19th-century Dublin, Fergus A. D'Arcy; Perceptions of agricultural labourers after the Great Famine, 1850-1870, Pádraig G. Lane. Par