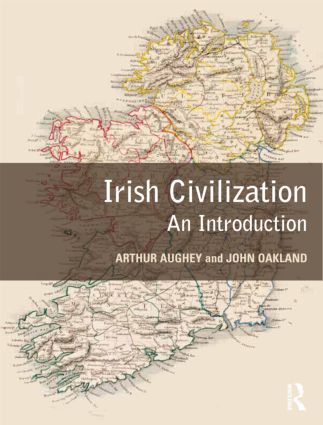 Irish Civilization provides the perfect background and introduction to both the history of Ireland until 1921 and the development of Ireland and Northern Ireland since 1921. This book illustrates how these societies have developed in common but also those elements where there have been, and continue to be, substantial differences.

It includes a focus on certain central structural aspects, such as:

Irish Civilization is a vital introduction to the complex history of Ireland and concludes with a discussion of the present state of the relationship between them. It is an essential resource for students of Irish Studies and general readers alike.

Arthur Aughey is Professor of Politics at the University of Ulster and Fellow of the Royal Society of Arts. He is also a Senior Fellow at the Centre for British Politics at the University of Hull. His previous publications include Politics of Northern Ireland: Beyond the Belfast Agreement (2005) Nationalism, Devolution and the Challenge to the United Kingdom State (2001) and Northern Ireland Politics, edited with Duncan Morrow (1996).

John Oakland was a Senior Lecturer in English at the Norwegian University of Science and Technology. His previous publications include British Civilization (2010), American Civilization co-edited with David C. Mauk (2009), British Civilization: A Student’s Dictionary (2003) and Contemporary Britain: A Survey With Texts (2001).