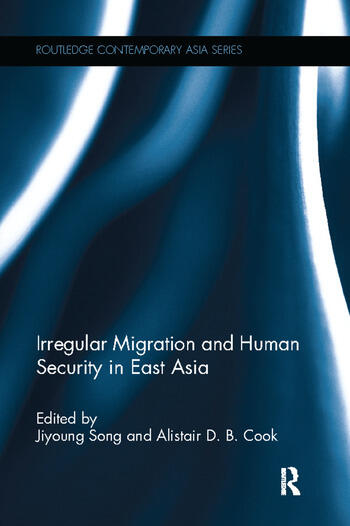 Across East Asia, intra-regional migration is more prevalent than inter-regional movements, and the region’s diverse histories, geopolitics, economic development, ethnic communities, and natural environments make it an excellent case study for examining the relationship between irregular migration and human security. Irregular migration can be broadly defined as people’s mobility that is unauthorised or forced, and this book expands on the existing migration-security nexus by moving away from the traditional state security lens, and instead, shifting the focus to human security.

With in-depth empirical country case studies from the region, including China, Japan, North Korea, the Philippines, Burma/Myanmar, Cambodia, Thailand and Singapore, the contributors to this book develop a human security approach to the study of irregular migration. In cases of irregular migration, such as undocumented labour migrants, asylum seekers, internally displaced people, trafficked persons, and smuggled people, human security is the cause and/or effect of migration in both sending and receiving countries. By adopting a human security lens, the chapters provide striking insights into the motivations, vulnerabilities and insecurities of migrants; the risks, dangers and illegality they are exposed to during their journeys; as well as the potential or imagined threats they pose to the new host countries.

This multidisciplinary book is based on extensive fieldwork and interviews with migrants, aid workers, NGO activists and immigration officers. As such, it will appeal to students and scholars of Asian politics and security, as well as those with interests in international relations, social policy, law, geography and migration.

Jiyoung Song is an Assistant Professor of Political Science at the Singapore Management University and Global Ethics Fellow, Carnegie Council for Ethics in International Affairs.

"The volume aims to address a gap in the field of security studies, namely the lack of attention to the subjects of human security, through a focus on a region that is not well-documented in much of the existing literature. The contributors collectively focus on the ways states and institutional structures—through migration and other policies—contribute to the human (in)security of irregular migrants."